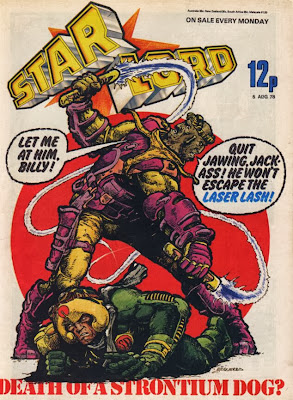 The Farnborough 'Droid Show is an annual event.

Ro-Busters charge circa $50,000 for a rescue from a burning building which deploys the Preying Mantis, fire fighting equipment, evacuation and medical care.

London Heathrow has an aero-space-port with an air traffic control centre. Transworld Droidlines and Buccaneer Airways are airlines. A 797 can fly at altitudes of 47,000 feet and speeds of M.A.C.H. 7. The fuselage is protected by a magnetic field, the flight deck is sealed from the public and outside the field so that the pilot and navigator can function. Both pilot and navigator are protected by triple fail-safe systems. 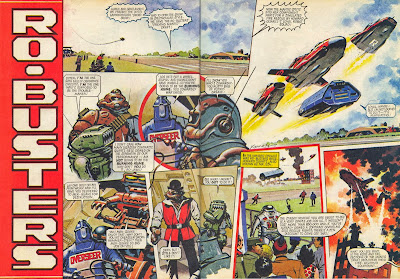 RO-JAWS
He plays the part of Hammer-Stein's rescuer in the Ro-Busters demonstration at the Farnborough 'Droid Show.

HAMMER-STEIN
He plays the part of the burning hume in the Ro-Busters demonstration at the Farnborough 'Droid Show.

OTHER CHARACTERS
HOWARD QUARTZ
He is present at the Ro-Busters demonstration at the Farnborough 'Droid Show.

ROGER THE ROBOT PILOT
Pilot of a Boeing 797 for Buccaneer Airways Flight 030 from London Heathrow to Dallas. A lightning strike knocks out his navigator robot. His own Strato-Bomber Nav Unit First Class takes over and he begins to fly erratically.

CHATTERBOX
Sky-Spy Droid. He is tuned to wartime distress signal and departs the Farnborough 'Droid Show for the location of Buccaneer Airways Flight 030.

WORST LINES
Navigator (whilst being struck by lightning): "Aah!"

INFLUENCES & REFERENCES
Concorde first flew in 1969, entered service in 1976 and continued commercial flights for 27 years. The robot pilot mentions a film called The Battle Of Britain, which could be a reference to either the fourth in Frank Capra's Why We Fight series of seven documentary films entitled The Battle Of Britain (1943) or a fictional account directed by Guy Hamilton Battle of Britain (1969). The Spitfire is synonymous with the Battle of Britain.

V. Gross is presumably a pseudonym.

REVIEW
Well, this is all set-up and no punchline.