Ro-Busters: Massacre On The Moon, Part 1 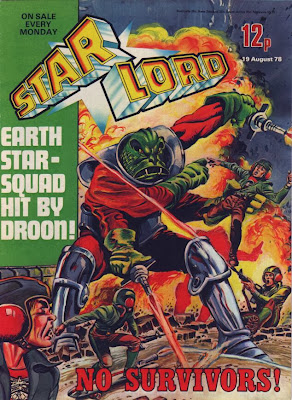 This strip appeared alongside Strontium Dog, Mind Wars and Holocaust and bizarrely a Timequake cover by Alberto Salinas, despite that strip not appearing in this issue.

SYNOPSIS
Ro-Busters head to the moon to mediate a conference between landowners.

Copernicus City is the main city of the moon and the headquarters of O'Gonsell Holdings and O'Gonsell Burger-Spoon. K. G. O'Gonsell owns most of the moon and runs a mining operation that has recovered contains minerals and ores such as Pinium, Kelvium, Silenium and Metaxium.

1500 miles from Copernicus City is the dome city of Craterville, owned by Lunar Diggings, Inc. They have also owned the Cordillera mountains near the Eastern sea since the 2050's.

The United Planetary Authorities are an organisation with jurisdiction over the moon.

Viradium is the rarest mineral in the solar system.

RO-JAWS
He travels to the moon with Ro-Busters and is caught in a firefight.

HAMMER-STEIN
He travels to the moon with Ro-Busters and is caught in a firefight.

OTHER CHARACTERS
K. G. O'GONSELL
He owns most of the moon and his company is mining it of rare minerals. 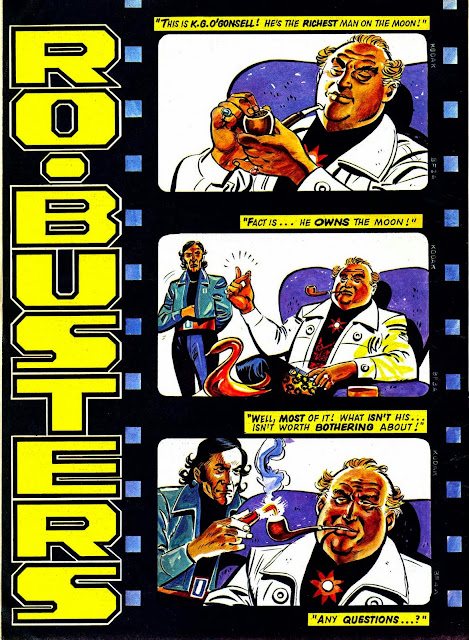 DEATHS
At least three. Curly's head gets shot off and another two robots are destroyed. Ro-Jaws and Hammer-Stein also find a human corpse.

BEST LINES
Ro-Jaws: "So this is Craterville! Looks more like a perishin' ghost-town to me!"

CONTINUITY & CROSSOVERS
K. G. Gonsell's story would seem similar to readers of 2000 A.D. as they had recently been reading about a lunar millionaire with a monopoly in Judge Dredd: Showdown On Luna 1 , 22nd Century Futsie and Meet Mr Moonie.

INFLUENCES & REFERENCES
Copernicus City is named after Nicolaus Copernicus (1473–1543), the astronomer who theorised the heliocentric model of the solar system which placed the Sun, rather than the Earth, at the centre.

NOTES
Pinium is named after Pino, while Kelvium and K. G. Gonsell are both references to Kelvin Gosnell.

REVIEW
This is a wonderful beginning with some beautiful art and a great cliffhanger. Howard Quartz's upworldly mobile dialogue in his briefing session about Gonsell is fantastic.