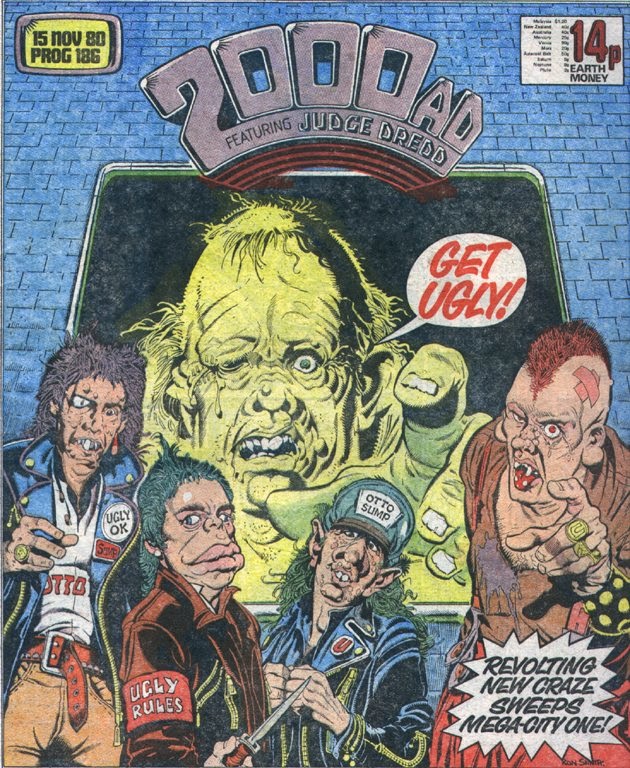 FIRSTS & LASTS
First appearance of Uglies, although not yet named as such.

INFORMATION
Otto Sump's Ugly Clinics have opened all over Mega-City One providing ugly treatments. There is on Paradise and 4th and another on 2088th Street.

OTHER CHARACTERS
OTTO SUMP
He earned over sixty million credits from his appearance on Sob Story. He invested the money in a chain of beauty clinics, but got a reputation for poor work and began getting requests from clients to make them uglier instead. Ugliness became fashionable and Sump turned his beauty clinics into ugly clinics. Sump sold a range of products designed to make you uglier, spent millions on advertising and bought Sump Tower. Two of his ugly clinics are targeted by a masked bomber. 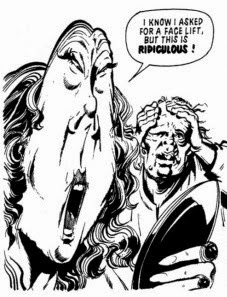 DEATHS
At least three. We see three corpses at the sight of the first bomb.

BEST LINES
Dredd (surrounded by corpses): "Somebody's discovered a new treatment, get ambulances down to the Sump clinic on Paradise and 4th!"

REVIEW
Another craze hits Mega-City One, but this one provides the opportunity for great visuals and Ron Smith's art shows some excellent before and afters, while the concept that ugliness could become fashionable if the right people take it up is brilliant. Dredd appears in the first panel to remind us it's his strip and is then absent until the end of this part. Mega-City One is arguably becoming a bigger presence than Dredd.