NAME
Ro-Busters: The Terra-Meks!, Part One - The Eve Of Destruction!

SYNOPSIS
Can Charlie prevent the destruction of Northpool?

INFORMATION
Northpool is a port on the western side of Britain. A bullet train tunnel and a slip road for the Trans-Atlantic Tunnel runs under the town. The Twentieth century sky-blocks have been condemned and are to be demolished and are to be replaced by a huge aero-space port with the residents relocated to underground flats.

Trees are kept in tree museums. Terra-Meks are demolition robots. The popularity of 'Mammoth' Jets has lead to fewer huge ships crossing the ocean.

CHARLIE
Enormous robot and ship's pilot, he tows ships in distress off the coast of Northpool into the harbour. He has been in operation for fifteen years, has become Northpool's most famous landmark and has a chair on the dockside, but he is needed less due to the prevalence of 'Mammoth' Jets. 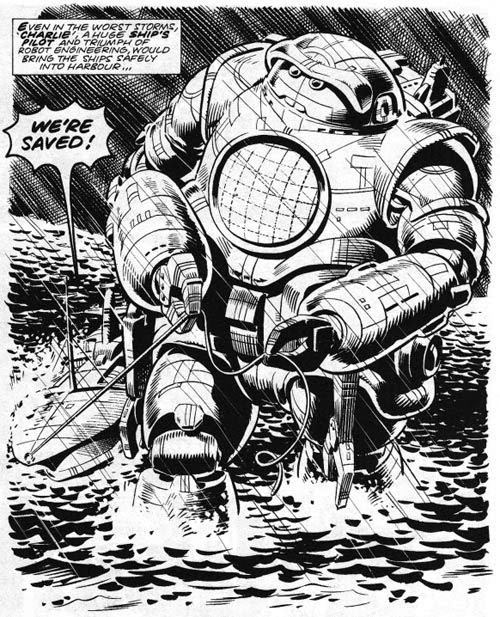 RON MURDOCH
Leader of Northpool Council. He is in favour of demolishing Northpool's sky-blocks and building an aero-space port in their place, while relocating the residents to underground d flats.

GRANNY FRASER
She is relocated from a sky-block to an underground flat at 999 Cosy-Down Burrows.

FATHER FLANNIGAN
Priest. He tries to convince Charlie to stop the Terra-Meks from destroying Northpool.

BEST LINES
Quartz: "How do the people of Northpool feel about my Terra-Meks destroying their homes?"
Murdoch: "Well, some of them are being rather difficult! They don't understand...this is the only way Northpool can survive! All these slum sky-blocks -- built in the Twentieth Century -- will be pulled down by your robots, Quartz! And the council will re-house everybody in nice new homes......underground!"

Of course there are no windows, of course you can't see the trees. Where did you think underground was?

CATCHPHRASES
This part ends on a cry of "Big Jobs!" from an anonymous Terra-Mek.

CONTINUITY & CROSSOVERS
The ship Charlie saves has come from Mega-City One.

REVIEW
This is fantastic! Gibbons' art automatically lifts the story, but the social satire of the piece is excellent too. It's surprising not to see Ro-Jaws or Hammer-Stein, but to be honest you don't miss them.