FIRSTS & LASTS
First appearance of Stadium and its Director. First use of Blackhawk as one word. First Black Hawk by 'Alvin Gaunt', Massimo Belardinelli and Tom Frame.

INFORMATION
The Entertainers are a species capable of space travel. One of their spaceships, Stadium, transports individuals from other planets and forces them to fight in gladiatorial battles.

BLACKHAWK
He is transported from Rome to a spaceship called Stadium. The ship's director explains that he has been chosen to fight as a gladiator for an audience. Blackhawk refuses and contemplates suicide rather than provide entertainment as a slave. He changes his mind when the Director leaves him alone with a fellow gladiator creature. 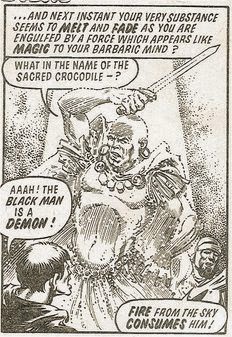 OTHER CHARACTERS
THE DIRECTOR
He is in command of Stadium. He explains to Black Hawk his new circumstances and briefly allows him to contemplate suicide.

DEATHS
Two. Blackhawk kills two drones upon his arrival on the Stadium.

BEST LINES
Blackhawk: "I will take no part in your tests! In Rome I was a Centurion. Now you would make me a slave again...but I have torn off the chains of slavery once - I will not wear them again! I will die first!"

Firstly, didn't happen. Secondly, that's not who Black Hawk is.

MISTAKES
The reprise from Part 19 isn't even close to how the story ended in Tornado.

RETROSPECT
This must have been a huge surprise at the time.

REVIEW
This is an exciting and intriguing development. Belardinelli's art is stunning and the dialogue is better than it has been for a long while. Black Hawk himself sometimes got lost in the original dynamic, this forces him front and centre with great results.