INFORMATION
In the Twenty-Third Century, judgement machines are used to determine guilt.

Organic material can be affected when exposed to time beams or left unprotected by time shuttles. The genetic codes of multiple life forms can become fused. 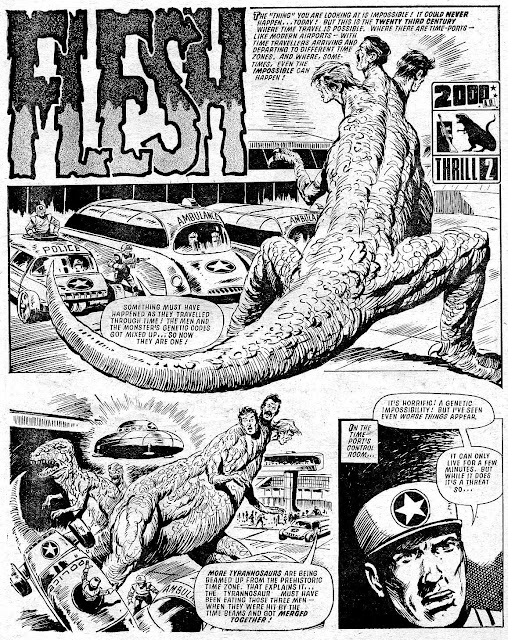 EARL REAGAN
He is blamed for the loss of the Trans-Time Base. He is due to face the judgement machine and possibly a long prison sentence.

OLD ONE EYE
She is still alive in the prehistoric timezone.

DEATHS
Six. The three Tyrannosaurs are all shot dead and the number is higher because one of them used be four different life forms.

BEST LINES
Time-Port Employee: "Something must have happened as they travelled through time! The men and the monster's genetic codes got mixed up...so now they are one!"

CATCHPHRASES
None. I miss Kronj.

REVIEW
This is anti-climactic. The arresting image of the three-headed human/dinosaur hybrid is quickly dispensed with and the narrative switches to an unsatisfactory wrap up of Reagan's story and a sneak peek at next week.