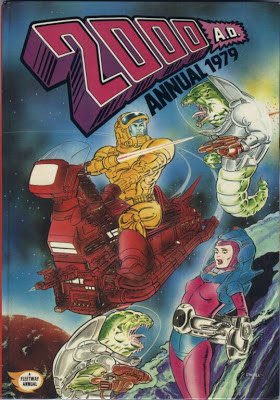 SYNOPSIS
Dredd investigates a series of deaths and takes on Dr. Panic.

Mega-City One has more crime than other cities. The Mega-City Morgue has at least 45 levels and requires security clearance for entry. The Cosmo Café is a dining establishment. The Panic Robot Repair Company operates out of a warehouse on the Lower Eastside.

Anti-Caffeine Laws forbid the use of Synthi-Caf. Gambling is illegal.

100 Credit banknotes are in circulation.

JUDGE DREDD
His security pass number is A14472. He investigates the tramp deaths and Max Normal leads him to Dr. Panic's Suicide Alley. Dredd is captured and set against a Robo-Judge with a single bullet. He shoots out the electricity supply, steals Panic's gun and destroys the Robo-Judge.

DR. PANIC
A cyborg. He runs the Panic Robot Repair Company as a front for Suicide Alley, a games arcade with deadly stakes. Dredd arrests and sentences him to 20 years in the time stretcher 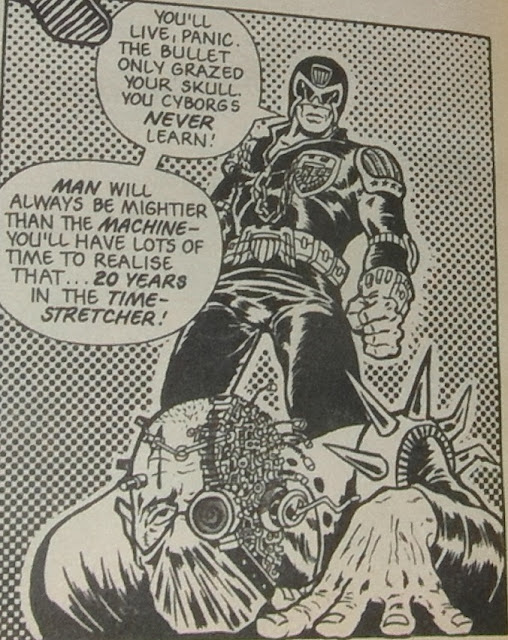 ARRESTS
One. Dr. Panic is sentenced to 20 years in the time stretcher.

BEST LINES
Dredd: "This is the fourteenth death, Judge - in ten days we've had fourteen killings of the city's down and outs - they're the dregs of society, but..."
Morgue Attendant: "...They have a right to live...very true, citizen!"

WORST LINES
Dredd: "Walter! Will you shut up snivelling and clean up that mess you've just made while I'm gone!"

CONTINUITY & CROSSOVERS
Set as it is in 2099, this could take part at any point between Max Normal's first appearance in 'The Comic Pusher' and Dredd's appointment to 'Luna 1'

MISTAKES
Synthi-Caf is illegal? Dredd drinks it all the time!

REVIEW
The artwork of Dr. Panic himself is fantastic, everything else here is pretty dreadful.
Posted by Dave at 10:00