SYNOPSIS
Reagan tries to trap and confront Old One Eye.

INFORMATION
Stars are a unit of currency.

OLD ONE EYE
She tracks Reagan across water and into a trap set for her with spike plants in a pit.

OTHER CHARACTERS
'CLAW' CARVER
He can't swim. Carver pushes a ranger off the raft and into the water to aid his own escape. Joe Brontowski saves Carver's life and he pledges to return the favour. 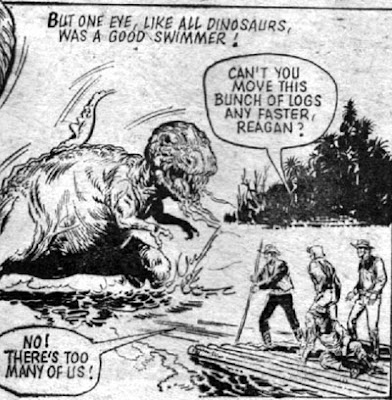 DEATHS
Six. Doc is crushed by a prehistoric snake, Reagan kills the snake. Claw Carver pushes a ranger off the raft to lighten the load and Old One Eye eats the poor fella up, whilst the other two unnamed rangers perish when a Phobosuchus upturns the raft, eating one and drowning the other. Old One Eye and the Phobosuchus fight and the former kills the latter.

BEST LINES
Claw Carver (whilst pushing him off the raft): "Heck! Sorry feller - I slipped!"
Claw Carver (as Old One Eye devours him): "What a terrible thing to happen - One Eye's got that brave man!"

WORST LINES
Reagan: "Try chompin' on that, you slimy critter!"

CONTINUITY & CROSSOVERS
The Phobosuchus has tasted humans before, probably the same individual from the first Flesh strip.

More Next Week! And Now You Can Play Flesh, Too! Great Dinosaur Game Starts On The Back Page Of This Prog!
Posted by Dave at 10:00