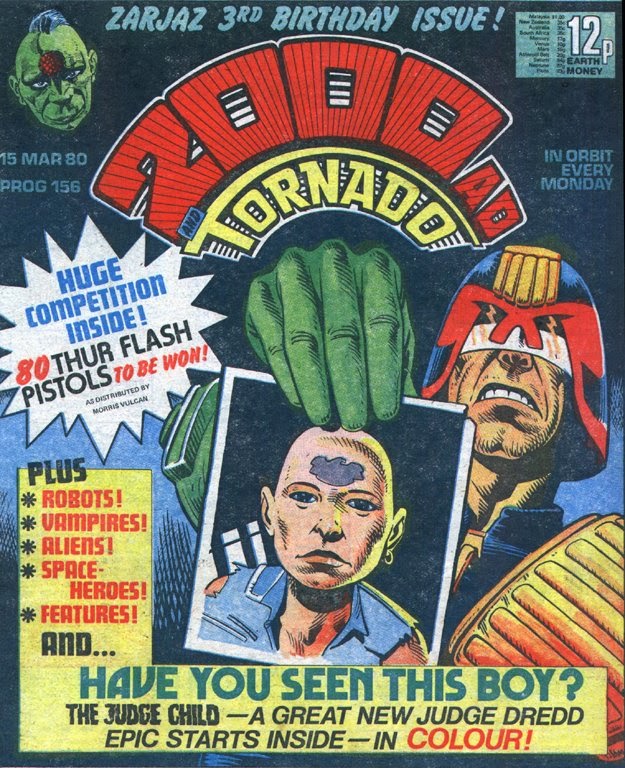 SYNOPSIS
Dredd goes in search of The Judge Child.

FIRSTS & LASTS
First use of Psi Division to predict the future. First appearance of Owen Krysler, albeit in flashback.

INFORMATION
(This strip takes place over the course of many, many days encompassing Judge Feyy's prediction the "many days" it took Dredd to find Krysler's settlement and then another week to find the slavers.)

There are 47 Owen Kryslers currently living in Mega-City One. A 48th left the city four years ago for the New Mutieland Territories.

Justice Department's Psi-Division has many Pre-Cogs whose task it is to predict the future. Several Pre-Cogs have predicted a time of crisis in the early 2120's. Lawmaster bikes are equipped message pods for times when radio contact is impossible. Named Judges: Judge Feyy (PSi Division).

In the Cursed Earth, many mutants live in isolated domesteads, Mutie Haven is just such a settlement with a population of 27. Such communities are easy targets for slave traders. Six months ago, slavers attacked a settlement east of Mutie Haven that was home to Owen Krysler. Neutron Flats is another settlement that has a slave market. Pockets of Sulphur Sand suck down anything that falls in.

Holograms can be used as a method of retaining an image. 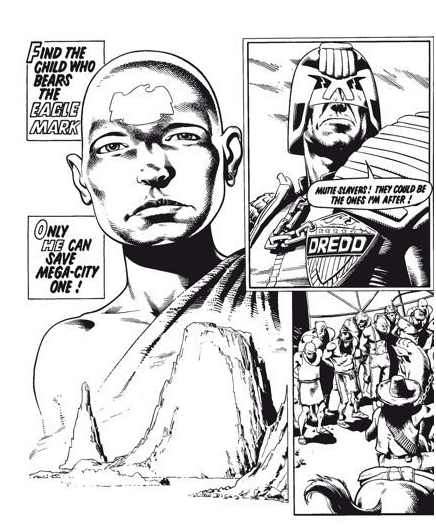 JUDGE DREDD
He is on the search for slave traders in the Cursed Earth and finds them at the domestead of Mutie Haven. Dredd kills two, before another catches him with a whip and drags him off his Lawmaster and along the ground. Dredd stops himself and pulls the slaver off his steed and into a sulphur sand pit. Dredd questions the slaver as he sinks and pulls him out when he is satisfied with the answers. He leaves him to the mercy of the Mutants.

OTHER CHARACTERS
OWEN KRYSLER
He was born in Mega-City One and has mark on his forehead shaped like the Eagle of Justice. He and his parents left the city four years ago to settle in the New Mutieland Territories. Six months ago Slavers attacked his settlement, killed his parents and took him away. He was not emotional about the experience. In Mega-City One, Judge Feyy predicts he will rule Mega-City One in its gravest hour ands dubs him The Judge Child.

JUDGE FEYY
Mega-City One's oldest Pre-Cog. His visions of the future have proved to be 88.8% accurate. On his deathbed he predicts a war that will destroy Mega-City One in the year 2120 and that Owen Krysler will lead the city in its time of need. He dubs Krysler The Judge Child.

BEST LINES
Dredd: "He's all yours, boys!"
Slaver: "Hey, wait! You promised!"
Dredd: "I kept my promise. You're out of the sulphur sand."
Mutie: "You're gonna dangle, Slaver!"

REVIEW
This is a great beginning and all the better for starting mid-story and then providing the exposition in flashback. The art is stunning with brilliant character designs.