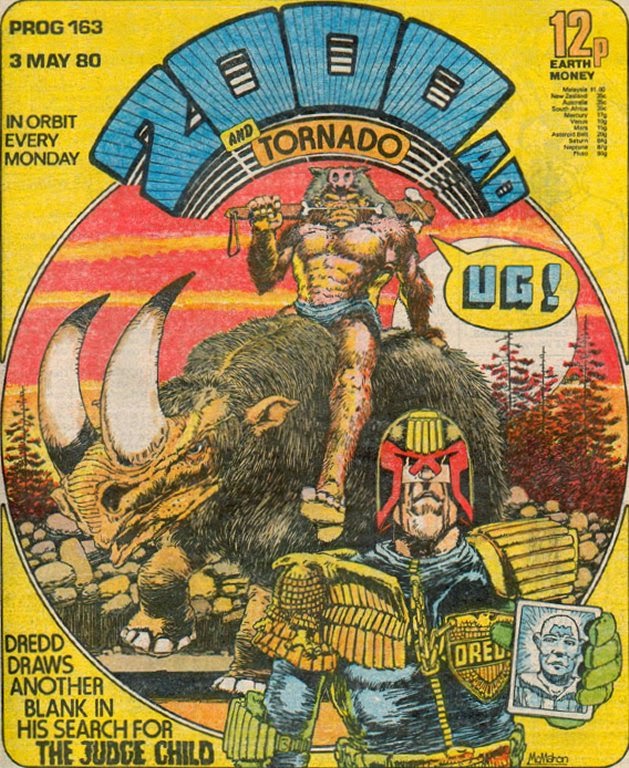 This prog also featured M.A.C.H.0, Robo-Hunter, The V.C.'s and The Mind Of Wolfie Smith, a Judge Dredd cover by Mike McMahon and the second of the seven wonders of the galaxy.

SYNOPSIS
Dredd unwittingly affects the outcome of a duel.

INFORMATION
The planet Ombra. The native dominant life form are the Om. Their society is primitive, but they record their history through songs, stories and painting. They believe in magic and Magic Maker is a important individual in the tribe. The females smear beetles blood on their faces. Other species on Ombra include the Omni-Fowl Owl and a creature that looks like a two-horned Rhinoceros.

JUDGE DREDD
Justice 1 lands briefly on the planet Ombra and Dredd has a look around, but soon leaves deeming the planet an unlikely location for Krysler's kidnappers to seek refuge.

OTHER CHARACTERS
BUGGO
Om painter in love with Uglika, also known as Buggo the Weak. He fights Black Boab for Uglika's affections, but the challenge is interrupted by Justice 1 landing. He knocks Black Boab into the path of his steed killing him. He became known as Buggo the Brave. He painted Dredd on the wall of his cave, believing him to be God and Justice 1 his chariot.

UGLIKA
An Om female. The object of the affections of both Buggo and Black Boab. She challenges them to fight each other for her.

BLACK BOAB
Om in love with Uglika. He fights Buggo for Uglika's affections, but the challenge is interrupted by Justice 1 landing and Buggo wins, knocking Black Boab into the path of his steed.

BEST LINES
Buggo (regarding a spell to help him beat Black Boab): "Will it work?"
Magic Maker: "If it doesn't, you won't be around to give me any complaints."

INFLUENCES & REFERENCES
Chariots Of The Gods?, a 1968 novel by Erich von Däniken.

REVIEW
The oddest part of The Judge Child yet is a tale of alien cavemen told through flashback and rhyme which only features Dredd on the last page. It shouldn't work, but it does. Seeing Dredd through the Om's eyes proves to be a rewarding experience and McMahon's art is excellent. The oddest thing about this part however would be the caption on the cover: "Dredd draws another blank in his search for the Judge Child", which entirely gives away that the story isn't going to move forward here and lowers the stakes accordingly.