SYNOPSIS
Johnny and Wulf catch up with Max Quirxx.

INFORMATION
The Strontium 90 present in nuclear fallout from the Great War of 2150 on Earth caused mutations in newborn children. Anti-mutant sentiment grows and new laws are passed preventing them from owning a business or being employed. As a result many starve and are reduced to begging. The only other option open to them is to become Search-Destroy agents.

Caytor is millions of light years from Earth.

An individual subject to a termination warrant has the right to return to the scene of their alleged crime to appeal their sentence. The vapour chamber is a method of execution.

A P-Bomb is capable of destroying an entire city. A city on Bario-3 was destroyed with a P-Bomb. A time bomb can transport an area and any individuals within a given period into the future. If used in a planetary atmosphere, then the planet will have moved along its orbit and the area in question could well now be in the vacuum of space. Blasters have a stun setting. 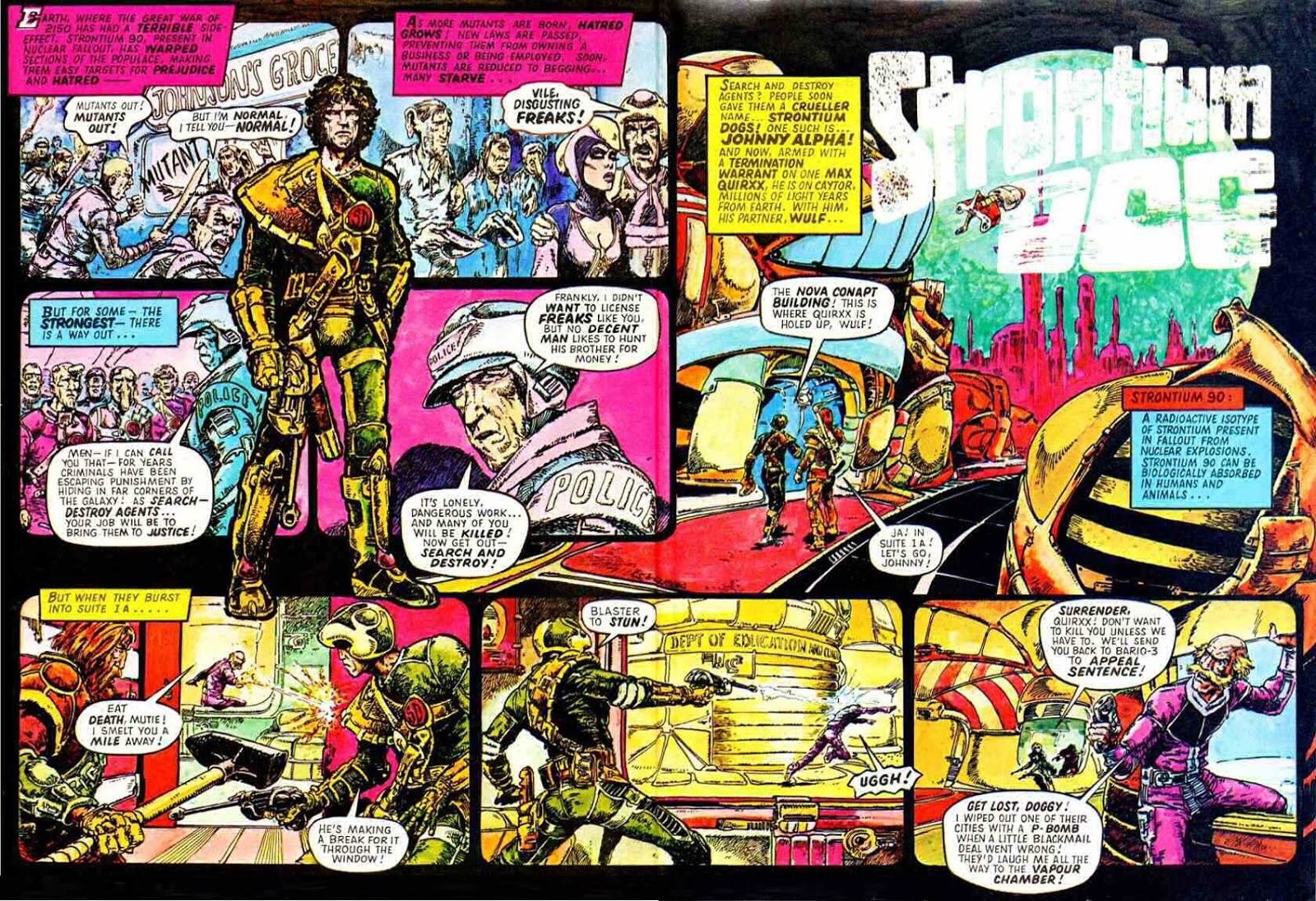 JOHNNY ALPHA
He kills Max Quirxx with a time bomb. He and Wulf give their payment to mutant beggar.

WULF STERNHAMMER
He provides covering fire while Johnny throws the time bomb into Quirxx's location. He and Johnny give their payment to mutant beggar.

OTHER CHARACTERS
MAX QUIRXX
He destroyed a city on Bario-3 with a P-Bomb. He is staying Suite 1A of the Nova Conapt on Caytor. He takes a woman and her daughter as hostages. Johnny Alpha uses a time bomb to send him two and a half days later and he dies in a spatial vacuum.

SHARON
Max Quirxx's hostage. Despite her mother's instructions, she thanks Alpha calling him Mr Strontium.

DEATHS
One. Max Quirxx is killed in the vacuum of space.

BEST LINES
Alpha: "Surrender, Quirxx! Don't want to kill you unless we have to. We'll send you back to Bario-3 to appeal sentence!"
Quirxx: "Get lost, Doggy! I wiped out one of their cities with a P-Bomb when a little blackmail deal went wrong! They'd laugh me all the way to the vapour chamber!"

MISTAKES
In Part 1, Max Quirxx was said to be staying in Suite 3A, here he's moved rooms to Suite 1A. Also, his crime appears to have moved up from multiple murder to mass murder.

REVIEW
The flashback opening is great, the time bomb is a brilliant concept used to fantastic effect and the strip ends on a lovely note. The only thing that doesn't quite work here is the anti-mutant discrimination.

Next Week: 'Excitements Is Bad For Our Poor Heartses!'
Posted by Dave at 10:00