SYNOPSIS
Ginger is reunited with Ro-Jaws, while Quartz plots the end of Ro-Busters.

INFORMATION
Robettes are immature robots. Goldilocks And The Three Robots is a retelling of a fairy tale with robots.

Ro-Busters haven't been called to a disaster in months.

OTHER CHARACTERS
GINGER
He was sent to the robo knacker's yard and reconstructed from pieces of other robots. He has been sent to Ro-Busters and is reunited with Ro-Jaws again.

MEK-QUAKE
He extorts money, comics or life from new arrivals at Ro-Busters. He is saving up for a twenty mega-ton atomic howitzer and collects Sergeant Rock comics. 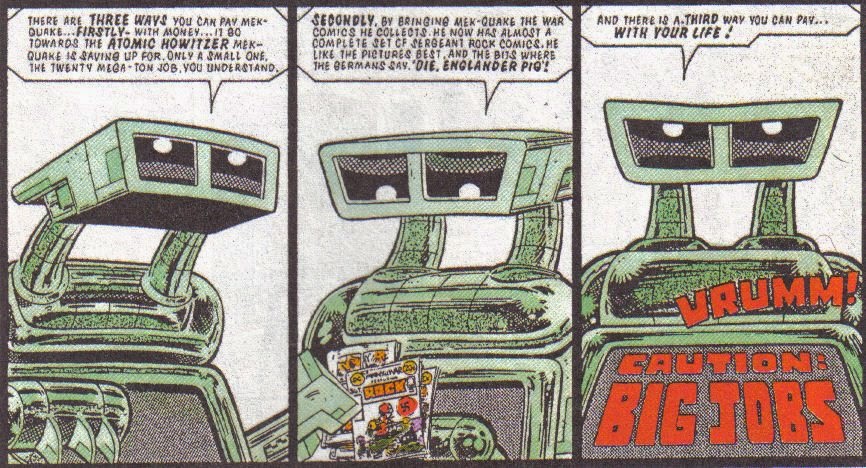 HOWARD QUARTZ
With Ro-Busters' profits down, he plans to destroy the Preying Mantis whilst it is full of robots and claim on the insurance.

MISS MARILN
She is horrified by Quartz' plan.

BEST LINES
Marilyn: "The mass murder of robots...robocide! That-that's horrible!"
Quartz: "Yes. Now I must make a list of the robots I want destroyed...No prizes for guessing which two robots will be top of my list!"

WORST LINES
Hammer-Stein: "Hmmm! You'll find him over there - telling a story to the robettes!"

Are they a Motown musical combo?

CATCHPHRASES
Ro-Jaws calls Ginger a "daft nerk" whilst complimenting him.

CONTINUITY & CROSSOVERS
Quartz hopes for a plague in Mega-City One or a pile-up in the Trans-Atlantic Tunnel. Ro-Busters reputation has suffered since Northpool's near demolition.

INFLUENCES & REFERENCES
Mek-Quake collects Sergeant Rock comics. Sgt. Rock first appeared in G.I. Combat #68 (1959) as The Rock, gaining a his rank a little later and his own comic in 1977. Quartz references the 1974 disaster movie, The Towering Inferno.

REVIEW
The return of Ro-Jaws, Hammer-Stein, Ginger and Miss Marilyn does a great job of convincing the reader that this will be business as usual after three stories that bucked the trend, but Quartz' plot upsets the applecart brilliantly.