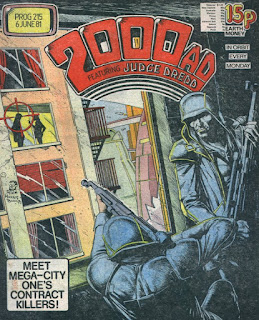 This prog also featured Tharg's Future Shocks, Meltdown Man, Return To Armageddon and Strontium Dog, alongside a Star Pin-Up of Tharg and all behind a Judge Dredd cover by Brian Bolland.

SYNOPSIS
Dredd takes on a pair of contract killers.

INFORMATION
In Mega-City One, Grover Cleveland Block is poor quality housing, Mark Clark Block is thought to be worse and Sir Kenneth Clarke Block is part of a new upcity development and considered much better accommodation. Mega-City One has a housing committee responsible for moving people out of slum housing. It's rare to see a human delivering things door-to-door in Mega-City One, it's work usually performed by robots.

Contract murder is also known as blitz, wipe-out, hit, big whack, among others. Organised contract killers are known as a blitz agency or 'blitzers'. All 'blitzers' are equipped with emotion-sensitive self-destruct devices or 'suicide boxes'. Conspiracy in a blitz agency murder carries a sentence of fifteen years in an iso-cube.

Munce can be fried.

JUDGE DREDD
He is called to the Lumly's home following the assassination of Teddington Lumly. He is present when an attempt is made on the life of Reeta Lumly. He intervenes and shoots a Blitzer dead. He arrests Reeta for her own safety.

OTHER CHARACTERS
REETA AND TEDDINGTON LUMLY
A jobless couple that rent poor quality housing in Grover Cleveland Block who upon being informed that they are expected to move into Mark Clark Block decide to commit suicide. They can't go through with it and they elect instead to spend their life savings taking a contract out on their own lives. They then discover that they are due to be moved to Sir Kenneth Clarke Block instead and that Teddington has successfully found employment as a kneepad grader, but at that moment the blitz agency strikes and he is killed. Reeta calls in the Judges. Dredd finds Reeta Lumly guilty of conspiracy in a blitz agency murder which carries a sentence of fifteen years in an iso-cube. He commutes that sentence in exchange for assistance in finding her husband's killer. When she discovers that the contract is still open and her life is still under threat, she insists upon serving it.

CHARLIE
Blitz Agency killer that Teddington Lumly contracted to kill him and his wife.

ARRESTS
One. Dredd finds Reeta Lumly guilty of conspiracy in a blitz agency murder which carries a sentence of fifteen years in an iso-cube. He commutes that sentence in exchange for assistance in finding her husband's killer, but she insists upon serving it for her own safety.

MISTAKES
Not necessarily a mistake, but why is Charlie so scaly? 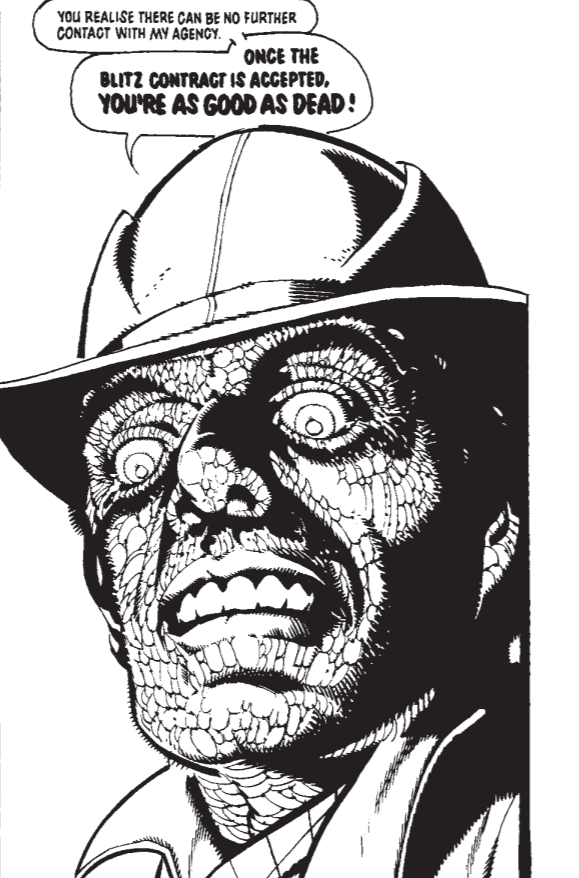 REVIEW
The artwork is great, the idea compelling and the script drives the story along well. This is the most engaging suicide attempt I can think of.