SYNOPSIS
An alien race from the future starts World War III and destroys the destiny of the Human race, but Time Control kidnaps a tramp steamer skipper to help them avert Armageddon.

INFORMATION
In 1997, a man called Lyon Sprague discovers a means of travelling faster than light. The Sprague Interstellar Drive carries humanity to the stars. By the 40th Century humanity was the greatest power in the universe and adversaries of the Droon. The Droon are a highly developed but brutal race from the Rigel system with a desire for more territory. They could not hope to beat the humans with conventional warfare, but they managed to steal the secret of temporal warp-dis-placement time travel.

Time Control attempts to prevent the Droon from changing history and operates a sub-station in the Cretaceous Era (roughly 85 million years before 1978).

On the 1st of May 1978 at 07:14 Greenwich Meantime London, New York and Moscow were all hit by nuclear strikes, soon after contact with Paris is lost. Following the nuclear strikes all the Time Control sub-stations after the 20th century ceased to exist. 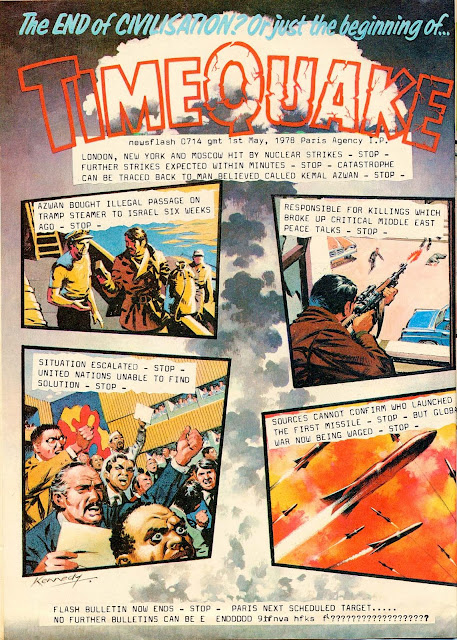 The Droon then attacked the Cretaceous sub-station.

JAMES BLOCKER
Skipper of a tramp steamer. He is abducted by Time Control seconds before his death in a nuclear disaster and taken to the Cretaceous Period Substation. They want him to travel back on 1978 and prevent himself from transporting Kemel Azwan to Israel.

SUZI CHO
A princess of the Haniken Empire of the 32nd century. Time Control member.

KEMEL AZWAN
The Droon travelled back in time and paid him to start a third world war. He bought illegal passage aboard a tramp steamer to Israel in March. Azwan is responsible for killings which broke up peace talks in the Middle East and is linked to the nuclear strikes on London, New York and Moscow.

DEATHS
Millions. Much of the populations of London, New York and Moscow are killed in a nuclear attack.

REVIEW
The opening page lends the story a grittiness that the Droon, dinosaur-proof force fields and the Time Control tunics couldn't. The continued use of the word sub-station and the weird details Harl Vinda supplies about his comrades makes Time Control seem a very odd bunch. I don't blame Blocker for being confused, but this strip still deals with the concept of alternative timelines very well.