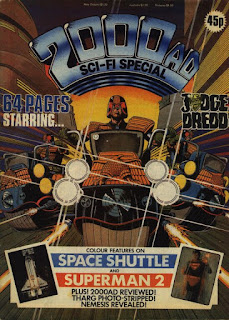 FIRSTS & LASTS
First mention of sugar being illegal in Mega-City One.

INFORMATION
In Mega-City One, there is an Eezi-Walk over a speedway near to Muhammad Ali Alley. The Nose And Lip Shop stocks Kosmik Kiss lipstick. Mega-Prison West. All Pan-Can road traffic enters Mega-City One through the North Gate, everything is checked for signs of radioactivity.

In 1999, scientists declared sugar to be a major cause of heart disease, obesity and tooth decay. It was banned and only artificial sweeteners were permitted. In Mega-City One, the illegal importation of sugar is still a crime as are withholding information from a Judge and defacing a Judge's uniform are crimes. Named Judges: Judge Gale, Judge Medway, Judge Ridley. Judge Watson

Hover-Juggers are used for transportation of goods via road. 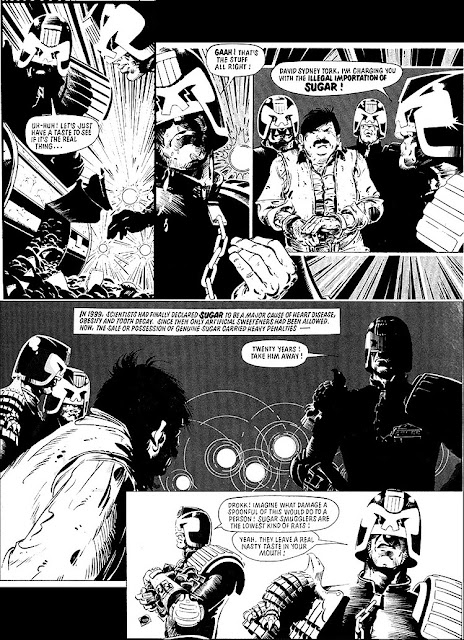 JUDGE DREDD
Whilst on patrol he sees Max Normal who gives him information about an illegal shipment of goods coming into Mega-City One tonight. They are shot at by a sniper. Normal is wounded. Dredd pursues the shooter, who takes a hostage. Dredd uses a ricochet shot to take him out and he falls onto the Mega-Way. Dredd investigates

OTHER CHARACTERS
MAX NORMAL
Whilst informing Dredd of an illegal shipment of goods coming into Mega-City One tonight, he is shot by a sniper and hospitalised. He recovers and the Justice Department authorises a payment of 40,000 creds.

ROXANNE GLEEG
She lives at Flat 17A, Ricardo Montalban Block, she is the girlfriend of Dave 'Boy' Tork and customer of The Nose And Lip Shop were she purchased Kosmik Kiss lipstick. Dredd arrests her for withholding information and defacing his uniform when she kisses his helmet.

DAVID SIDNEY TORK
Known mobster, nicknamed 'Boy'. Boyfriend of Roxanne Gleeg. He was released last week from Mega-Prison West. Dredd stops his Hover-Juggers at the North Gate and after a protracted chase and firefight. Dredd arrests him for the illegal importation of sugar.

JUDGE WATSON
He assists Dredd's blockade of the North Gate. He gets shot.

ARRESTS
Two. Dredd arrests Roxanne Gleeg for withholding information from a Judge and defacing a Judge's uniform. He later arrests Tork for the illegal importation of sugar and sentences him to twenty years.

DEATHS
Four. Dredd shoots the assassin who falls into traffic below and is "spread over 500 metres of mega-way". Tork's driver is shot dead by Judges and the driver and passenger of Hover-Jugger 1 die in a explosion.

BEST LINES
Adult with Susan: "Look, Susan - that what you'll get if you don't behave"

CATCHPHRASES
Dredd: "Halt in the name of the law!", a dying perp named Mico screams an "Aieeee!" and a Judge says "Drokk!"

REVIEW
The action sequences are impressive and it's great to see Max Normal back again. The script is at great pains to avoid spoiling the reveal of the sugar, with its references to white powder, but the title has already given that away. Colin Wilson's art is magnificent and the layout of the panels really gives it a boost.