SYNOPSIS
The Chief Judge is killed, Cal replaces him and Dredd is shot.

INFORMATION
Mega-City One has a rejuvenation clinic.

If the Chief Judge dies, then the Deputy Chief Judge automatically takes over his duties. Named Judges: Judge Schultz.

JUDGE DREDD
He rushes to the Chief Judge's bedside. He realises that the Special Judicial Squad are responsible. Upon leaving his home, he is shot through the head and given a one in a hundred chance of surviving.

OTHER CHARACTERS
CHIEF JUDGE CLARENCE GOODMAN
He has been Chief Judge of Mega-City One for 43 years and in considered a celebrity by some. He receives a monthly treatment at a rejuvenation clinic. He is set upon by knife wielding perps who stab him repeatedly. He later dies of his injuries, but not before he manages to place an SJS button ripped off in the struggle into Dredd's hand.

DEPUTY CHIEF JUDGE CAL
He orders the assassinations of Goodman and Dredd, has a haircut and takes over as Chief Judge. 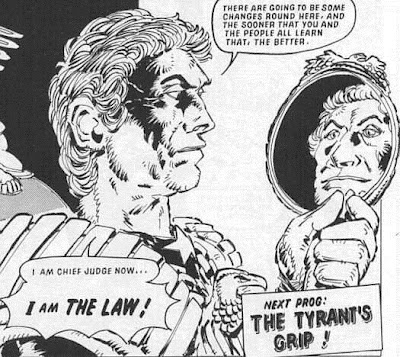 JUDGE QUINCY
He is responsible for the attempts on the lives of Goodman and Dredd. He loses a button in the former and when Cal realises he orders him to conduct his duties in his underwear.

WALTER THE WOBOT
He fears for Dredd's life.

DEATHS
One. Goodman is killed.

BEST LINES
Cal: "Mmm...the robe of office suits me perfectly! I was born to be Chief Judge - I've always known it. Haven't you, Schultz?"
Schultz: "Er, yes sir. Always."
Cal: "How could you always have known it, Schultz? You only met me two years ago. I have a way of dealing with liars!"

INFLUENCES & REFERENCES
The story's title probably alludes to "The Day The Music Died", a lyric in Don McLean's song 'American Pie' that refers to the February 3, 1959 plane crash in Iowa that killed Buddy Holly, Ritchie Valens and The Big Bopper.

REVIEW
This is a phenomenal beginning. The dialogue is sharp throughout, the assassination attempts are both shocking and Cal's punishment for Quincy is very, very funny.