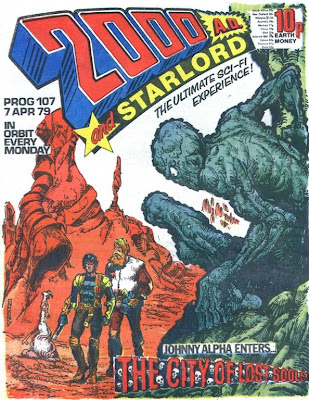 SYNOPSIS
Dredd attempts to replace Cal's subliminal hypnotism with his own.

INFORMATION
Mega-City One has space-raid sirens. The Statue of Judgement has an anti-vandal door at ground level which is impervious to even the bike cannon on a Lawmaster.

Tron is a planet with more than one dominant species.

JUDGE DREDD
He and his men break into the Hall of Justice and substitute Cal's briefing tape for their own. He instructs the newly unhypnotised Judges to go along with Cal's wishes until they hear the space-raid sirens. When the siren sounds Dredd and the Judges attack the Kleggs.

OTHER CHARACTERS
JUDGE FARGO
Born in 2001, he was the first Chief Judge of Mega-City One and was given the mantle of Father of Justice. He died in 2051 and was preserved to lay in state in the Hall of Justice's Hall of Heroes. His tomb also hides a secret escape route. 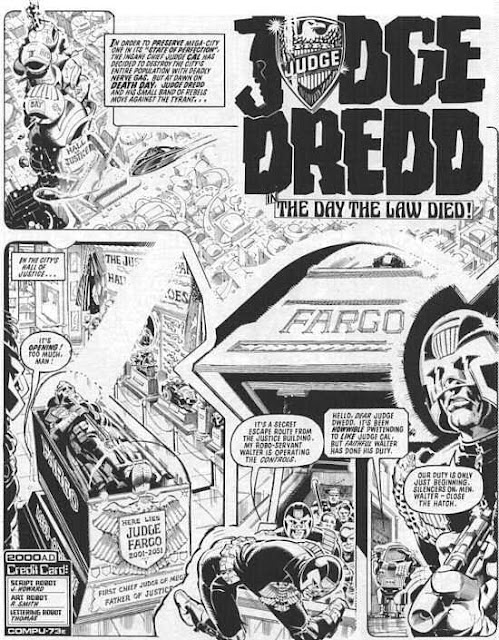 JUDGE GRAMPUS
He plans to leave Earth for a contract on the planet Tron to eat the sub-species. Instead he is killed in Dredd's attack.

JUDGE-TUTOR KELSO
He is crushed by a sliding anti-vandal door at the foot of the Statue of Judgement.

DEATHS
Dozens. Dredd kills three Judges with "good clean shots", the Judges shoot and/or run down the Kleggs and Judge-Tutor Kelso is crushed by a sliding door.

BEST LINES
Grampus: Klegg mercenaries leave now. Got new contract on Tron planet - eliminating sub-species! We get to eat sub-species!"
Cal: "Goodbye, Grampus. It's been a pleasure dealing with you. You're so delightfully vicious!"

CATCHPHRASES
Walter says Dwedd, howwible, pwetending, Judge Bob says "My Dok" and Dredd "I am the law now - and you better believe it!"

CONTINUITY & CROSSOVERS
The Statue of Judgement was previously seen in 'The Statue Of Judgement'.

INFLUENCES & REFERENCES
Have insert something will travel was apparently a common phrase prior to Have Gun – Will Travel (1957-1963), but the US Western series must have popularised it.

REVIEW
When the tables finally turn and they do so in style. The bizarre decisions to hide a secret passage under Fargo's tomb and to situate nerve gas release controls at the top of the Statue of Judgement are great.