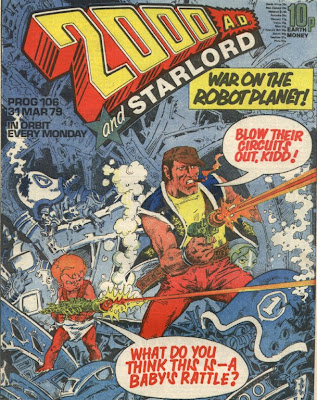 INFORMATION
(This strip begins on the hundredth day of Cal's reign, circa 20th January 2102)

Mega-City One is made up of at least 437 Districts. Locations in Mega-City One include Spearman Avenue, an area of the city known as Padmore, City Bottom Row is in District 437.

Millions of citizens have been condemned to Labour Blocks, working to maintain the wall.

For the first time in 170 years, the trains are running on time. The average time of delivery for a first class letter was reduced from 21 days to 4 hours.

Chief Judge Cal announces that he plans to release a nerve gas that will kill Mega-City One's citizens but leave building and documents unaffected and therefore able to stand testament to his achievement.

JUDGE DREDD
He orders Judge Pepper to create a briefing tape which could be used to remove Cal's hypnotism. 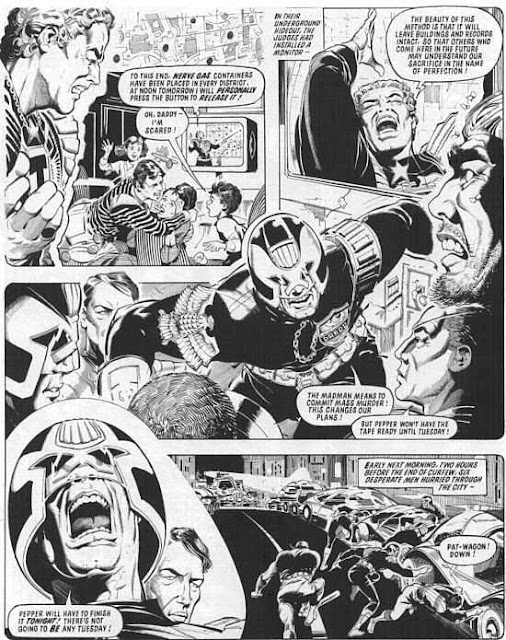 JUDGE WALTER THE WOBOT
He sends Fergee a crime briefing tape. He serves Cal his breakfast.

CHIEF JUDGE CAL
He decides that Mega-City One has reached perfection and elects to preserve this by killing its citizens with nerve gas.

BEST LINES
Cal: "As you know, citizens, my government of this city has reached perfection. I am told the only way to go is down...but I do not agree!...We can go out, citizens! We can end our lives in a glorious moment of sacrifice - and preserve our perfect city forever in its finest hour!...To this end, nerve gas containers have been placed in every district. At noon tomorrow I will personally press the button to release it!"

REVIEW
Where Ron Smith's artwork seemed jarring before, here it takes on a clinical and sinister edge that really suits this point in the story.