Judge Dredd: The Fear That Made Milwaukee Famous, Part 1

NAME
Judge Dredd: The Fear That Made Milwaukee Famous, Part 1

INFORMATION
A signal caused an American fifty megaton bomb to launch and hit Milwaukee, the blast cracked the bed of Great Lake Michigan open and the water drained away leaving an arid valley. The city lies next to some volcanic hills and it glows at night. The ghost of Milwaukee is rumoured to return each night to seek vengeance and kill individuals in the city at night. Dust Buggies are a commonly used transport vehicle in the Cursed Earth.

Mutant dog vultures are an example of Cursed Earth fauna. Their meat is apparently stringy and rancid

A Judge's Lawgiver can be equipped with a silencer. use Y-Rations

The Red Leg Raiders are a band of mutants lead by Rhode Island Red.

JUDGE DREDD
He has a warrant for Rhode Island Red's arrest and ventures into the Cursed Earth to find him. 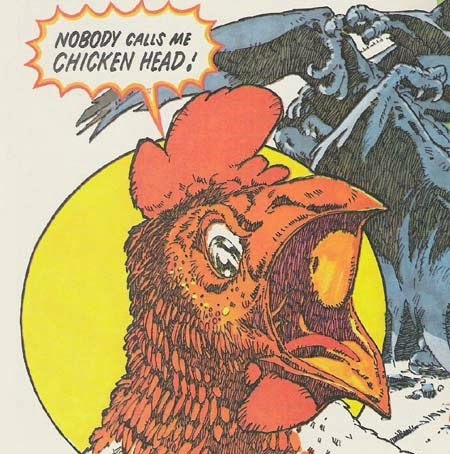 WORST LINES
Dredd: "Three others running for it!"

REVIEW
This and Part Two essentially form the centrepiece of the Annual, but do so without much in the way of context. Why is Rhode Island Red worth all this trouble? The artwork is great and the colouring is brilliantly bonkers.