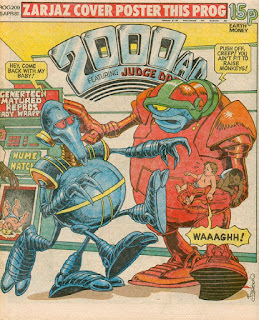 SYNOPSIS
A examination of the victims and perpetrators of body sharking.

FIRSTS & LASTS
The first of The Mega-Rackets, a collection of two-parters highlighting different facets of organised crime in Mega-City One. The first mention of body sharking, Shampaine (not yet Shampagne) and the first Judge Dredd by Colin Wilson.

INFORMATION
Mega-City One's Pellmell Street has a Ratner body outlet. There is a Xyklobs factory in the Mega-City. Sedgewick, Hedgewick, Fuster & Frome is a Mega-City One law firm.

Homes for the semi-dead place the dying in suspended animation so their last few hours can become years. The patient is injected with cryogenic drugs and quick frozen with liquid nitrogen. Cut-price homes for the semi-dead, such a Ratner's Rest Home, offer this service on a budget and often have a sideline in body sharking.

Body sharking is the illegal dealing in the bodies of living humans. In 2103, it has the highest growth rate among Mega-City One's organised crime rackets. Statistically one in four of Mega-City One's citizens will have dealings with a body shark during their lifetime. Body sharks will lend money take a living person as security and charge astronomical interest rates.

Shampaine is a beverage often drunk in celebration. A flying forklift is a heavy lifting apparatus that flies.

JUDGE DREDD
He catches the Mungo brothers attempting to rob a bullion van.

OTHER CHARACTERS
MR HEINZ
He wants a job at the Xyklobs Factory and is willing to have his wife frozen in exchange for 5000 credits to bribe the foreman into giving him the job. He is later mugged by another unsuccessful job applicant.

REMINGTON RATNER
He controls most of Mega-City One's body outlets. He lends the Mungo brothers 100,000 credits to finance a heist, but wants them to pay back double by the end of the week. He is represented by Sedgewick, Hedgewick, Fuster & Frome.

THE MUNGO BROTHERS
Three brothers. They borrow 100,000 credits from Ratner offering their elderly widow mother as security. They buy a case of Shampaine to celebrate and hire a flying forklift to do the job. The bullion van they intend to steal is heavier than expected and the forks gets jammed. They are unable to escape and are caught by Judge Dredd. He kills one, Vince, and arrests the other two.

ARRESTS
Two. The two surviving Mungo brothers are arrested by Dredd and sentenced to twenty years.

BEST LINES
Heinz: "When I get the job I'll work like mad, Hilda! I'll have you back home in a year - three at most. It'll all be for the best, you'll see."
Hilda: "You've explained it all to me before, dear. Don't forget to water the plants."

REVIEW
This is fantastic. The artwork is great and the narrative balances the plight of Citizen Heinz, the greed of Ratner and the stupidity of the Mumbo brothers brilliantly.
Posted by Dave at 10:00