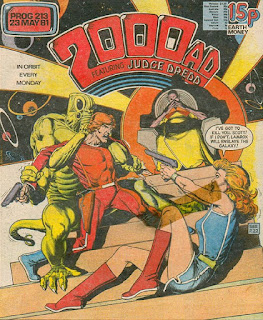 SYNOPSIS
Umpty is back. Dredd investigates the supply chain.

INFORMATION
In Mega-City One, there is a Malcolm Allison Block.

Umpty Bagging is the illegal manufacture and sale of addictive Umpty candy. 22nd Century medicology has permanently eliminated all known addictions, with the exception of Umpty. Mellowmel is an ingredient of Umpty.

The Justice Department has a dedicated Umpty Squad and operates Umpty Clinics where addicts can dry out. Named Judges: Judge Cheyney, Judge Jones. 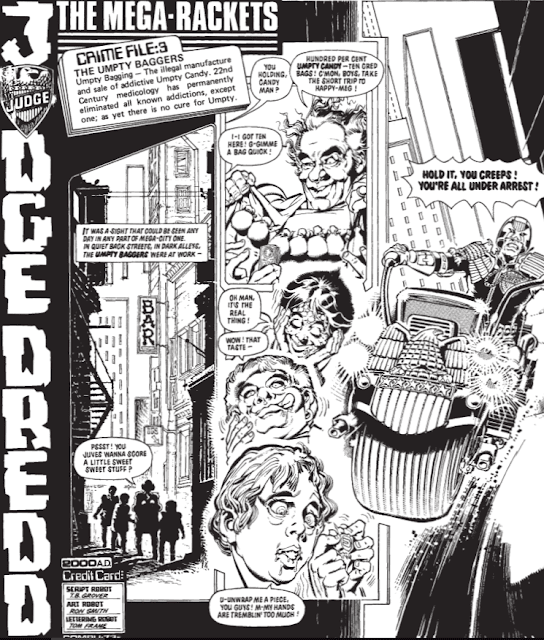 OTHER CHARACTERS
CANDY MAN FITCHIT
Umpty bagger working for Oggie Jong. Dredd arrests him and discovers he is addicted to Umpty. He uses this to get information out of him.

JUDGE CHEYNEY
Head of the Umpty Squad. Dredd is not impressed with his results.

OGGIE JONG
Member of the Jong crime family. They are tipped off that Uncle Ump is, contrary to popular belief, alive in space. The find him and acquire his Umpty recipe and kill him. Their Umpty factory is situated on the top floor of Malcolm Allison Block, but he is warned to get any evidence out by his informer.

UNCLE UMP
He is discovered two light years from Earth by the Jong brothers. Uncle Ump's recipe is so precise that it requires twelve drops of mellowmel and to be whisked clockwise for exactly thirty-seven beats. The torture him to reveal his Umpty recipe and when he does they throw him out of an airlock.

CONTINUITY & CROSSOVERS
There is a flashback to the events "over a year ago" of Uncle Ump's Umpty Candy. The Ump dumping is the second chump dumping in as many weeks.

MISTAKES
Medicology isn't a word. Yet. The leader of the Jong gang is identified as both Oogie and Oggie.

REVIEW
This sequel to Uncle Ump's Umpty Candy takes the drugs metaphor of the first and turns it up to eleven. This time around Ump himself is the first victim of his recipe and his death makes for a darker tale altogether.

Next Prog: Bagging The Baggers!
Posted by Dave at 10:00