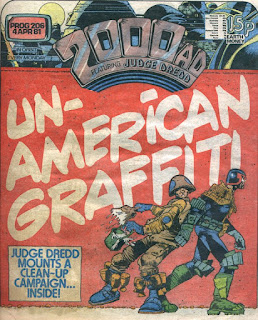 This appeared alongside Tharg's Future Shocks, Meltdown Man, Return To Armageddon and Strontium Dog with a Judge Dredd cover by Mike McMahon.

SYNOPSIS
Mega-City One is plagued by a wallscrawl craze and Chopper is determined to be King Scrawler.

INFORMATION
Mega-City One Cityblocks include Sonny Bono Block, Huck Widney Block. 87% of the population is unemployed, in preparation unemployment is a compulsory subject in Mega-City One schools. Wallscrawl has become a competitive endeavour in Mega-City One as Scrawlers attempt to get their name most prominently featured. The Atlantic Wall is popular with Scrawlers.

The minimum penalty for juvenile offenders caught wallscrawling is six-months in a juve-cube. Judges perform gatesearches at the entrance and exit to schools. Named Judges: Judge Churchill

JUDGE DREDD
He has been put in charge of the wallscrawl clean-up campaign by the Chief Judge.

OTHER CHARACTERS
MAYOR GRUBB
He appeals to the Chief Judge to sort out the city's wallscrawl problem.

MARLON 'CHOPPER' SHAKESPEARE
The son of Bert and Ruby Shakespeare. He got an F in Unemployment. He is a prolific wallscrawler, his tag is Chopper with a smiley face in the 'O'. He sprays it along the full height of Huck Widney Block.

BERT SHAKESPEARE
Ruby's husband and Marlon's father. He claims to be the only man in Mega-City One to head egg into a bucket.

RUBY SHAKESPEARE
Bert's wife and Marlon's mother. She washes up, she dirties the dishes and washes up again, continuously.

SATCHMO
Nickname for a wallscrawler.

'THE PHANTOM'
Wallscrawler. Sprays "Chopper is a ninco signed The Phantom" above Chopper's name on Huck Widney Block. 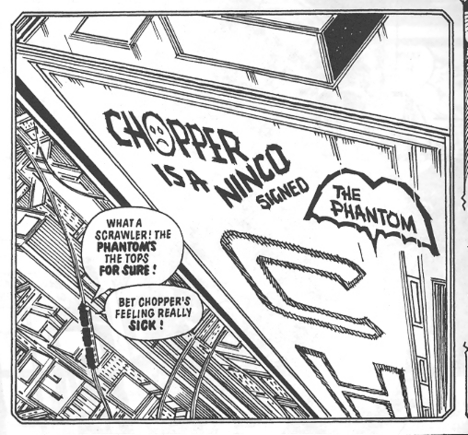 BEST LINES
Ruby Shakespeare: "Washing-up is so worthwhile, Marlon. I have a box of dirt here, and when the dishes are clean - why I just dirty them all over again!...Then I was them, and dirty them. Wash them and dirty them. Life can be so boring if you don't have an interest, Marlon..."

CONTINUITY & CROSSOVERS
The graffiti in a opening splash references Judge Cal first seen in Crime And Punishment, The Fear That Made Milwaukee Famous, Ratty in The Fink , Judge Death, Who Killed Pug Ugly?. Mayor Grubb returns, first seen in The Day The Law Died.

INFLUENCES & REFERENCES
The title is obviously a play on American Graffiti (1973). Sonny Bono Block is named for Salvatore Phillip 'Sonny' Bono (1935–1998) the American recording artist and producer, who came to fame in partnership with his second wife Cher. Satchmo's nickname was shared by jazz musician Louis Armstrong (1901-1971). Shakespeare was a writer.

RETROSPECT
At this point, it's impossible to anticipate the impact that Chopper will have on Judge Dredd and the wider Dreddverse via his own strip.

REVIEW
This is fantastic. Almost Dreddless, but expertly invites readers to want to Chopper to succeed and question their previous loyalty to the Judges. The artwork and the script are wonderful. A classic in the making.