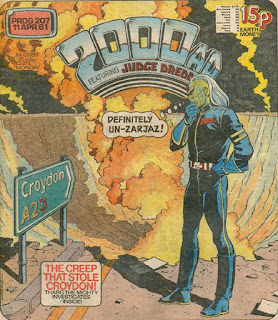 This appeared alongside Tharg's Future Shocks, Meltdown Man, Return To Armageddon and Tharg the Mighty with a Tharg cover by Dave Gibbons.

INFORMATION
The White Cliffs of Dover have been imported to Mega-City One from abroad. It costs 50 creds to view them and 150 creds for a cliff walk.

A victim of graffiti can be charged under the public nuisance act unless they clean up the graffiti. Y.P. is an acronym for Young Perp. Named Judges: Judge Lord.

JUDGE DREDD
He is present at the Statue of Judgement when Marlon Shakespeare is arrested.

OTHER CHARACTERS
MARLON 'CHOPPER' SHAKESPEARE
He scrawls his tag on the White Cliffs of Dover and the underside of a Judges' hover wagon. Chopper accepts the Phantom's challenge to scrawl the Statue of Judgement. They meet on the side of the statue and are caught together. He sprayed the Statue of Judgement's badge with heat-sensitive paint that reveals a smiley face as the sun warms it the next day.

'THE PHANTOM'
A city painting droid who challenges Chopper to scrawling the Statue of Judgement. They meet on the side of the statue and the Judges' searchlights reflect off its metallic casing and they are both caught. It commits suicide leaping off the statue rather than be reprogrammed.

ARRESTS
One. Chopper is arrested.

DEATHS
One. The Phantom commits suicide when caught.

BEST LINES
Churchill: "You've got to admire their cheek in a way. They're kids with a lot of determination and guts-"
Dredd: "They're lawbreakers, Churchill - don't forget it! They're issuing a direct challenge to us. They must be stamped on hard!"

MISTAKES
Not necessarily a mistake, but the importer of the White Cliffs of Dover says he got them from England, not Brit-Cit or the Brit-Territories.

REVIEW
Even if Part 2 were awful, Part 1 would still be an absolute classic. Thankfully, the second part builds beautifully on the first. The White Cliffs of Dover make for a brilliantly barmy blank canvas, the revelation that the Phantom is a robot is very nicely handled and the parallel that Chopper sees with his own life are great, but the heat-sensitive paint gives us a fantastic image that means Unamerican Graffiti can have its cake and eat it. One thing is for certain, the reader is invited to root for Chopper and the strip would never be the same again.