REPRINTS
Extreme Edition 3, The Best Of 2000AD and Invasion!

SYNOPSIS
Britain is invaded by Volgan forces in a war that last just eight hours, but Savage's war is just beginning.

INFORMATION
(The strip begins on January the 1st, 1999)

B.B.C. Three is a television channel broadcasting in Britain.

N.A.T.O. had established a 'Ring of Steel' around the thousand mile long Volgan frontier, but their forces broke through and invaded Europe. At 6:00AM on the 1st of January 1999, the Volgan Republic of Asia attacks Britain. Missiles carrying thermonuclear warheads were launched from underground silos in Asia. A fifty megaton bomb explodes in the Midlands and causing the destruction an entire city. Volgan forces capture Heathrow Airport and begin using it to bring in transport planes carrying armoured vehicles and men. There was fighting in London's streets, but by 10:00 AM the Volgans held Aberdeen, Edinburgh, Belfast, Leeds, the Rhondda, London and the North Sea oil rigs. King Charles III and the Royal Family were evacuated to Canada and the British Government surrendered to the Volgan Army. The country is renamed The New People's Republic of Britain. The United States agrees to the Volgan Occupation of Britain. The war last eight hours. It was nicknamed Black Friday.

The Volgan's yellow skull emblem is raised over Buckingham Palace, St. Paul's Cathedral was turned into a military court and a curfew of 6pm is established. 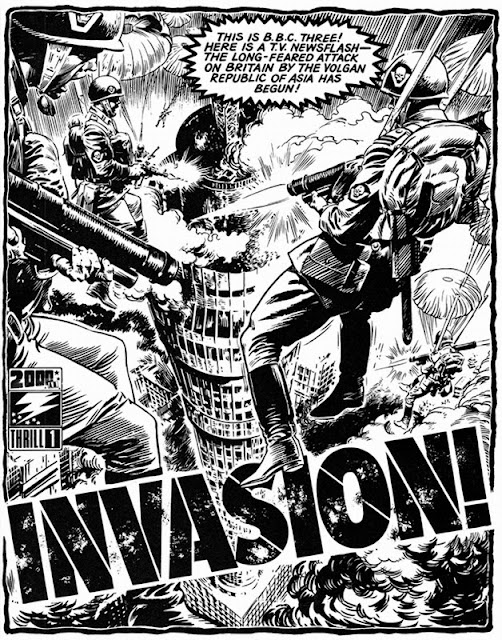 BILL SAVAGE
Lorry driver. The Volgans seized his lorry in the North and he is forced to hitch-hike back to London. His wife and children were killed when a stray shell destroyed his home. The only thing he is able to retrieve from the rubble of his home is his shotgun. He shoots at a Volgan patrol vehicle causing it to crash and then kills a soldier that is thrown clear.

OTHER CHARACTERS
ANGELA RIPPON
Newreader on B.B.C. Three. She reports on the Volgan invasion and subsequent surrender of the British government.

MARSHALL VASHKOV
Leader of the Volgan forces. He presides over a military court at St. Paul's Cathedral that executes members of the previous government.

DEATHS
Probably millions. We see Lady Shirley Brown executed by a firing squad, then Savage kills at least one Volgan soldier and maybe the rest of the patrol vehicle as well.

BEST LINES
Volgan Soldier: "You are under arrest, British scum! Come out from hiding!"
Savage (before he shoots the Volgan dead): "With pleasure, Sunshine - but I ain't hiding...I'm reloading!"

Daily Mirror is a British national daily tabloid newspaper founded in 1903, in 1963 the Mirror became part of the International Publishing Corporation which owned 2000 A.D.. Angela Rippon, born in 1944, is a British television journalist and newsreader. In 1975, she became the first woman to present the BBC national television news on a permanent basis. Rippon appeared on a Morecambe and Wise Christmas Show in 1976.

Jesus Blasco was born in 1919. He created Cuto and Capitán Trueno in his native Spain. In the UK, he worked on The Steel Claw and Buffalo Bill, Invasion was his only work for 2000 A.D.. He died in 1995.

REVIEW
The opening splash is astonishingly good and the art maintains the same standard throughout. The script is brilliant and the exposition of The Eight Hour War that sees Britain overrun by the Volgans is never unwieldy. We don't meet Bill Savage until the fifth page, but he makes an immediate impact. Invasion! gets off to a fantastic start.

experience future shock again + next week
Posted by Dave at 10:00