SYNOPSIS
Savage traps and kills the head of the Volgan army and destroys a huge contingent of their troops.

INFORMATION
There is a hovertrain that runs from London to Glasgow. The Channel Tunnel is due to open in 2002. 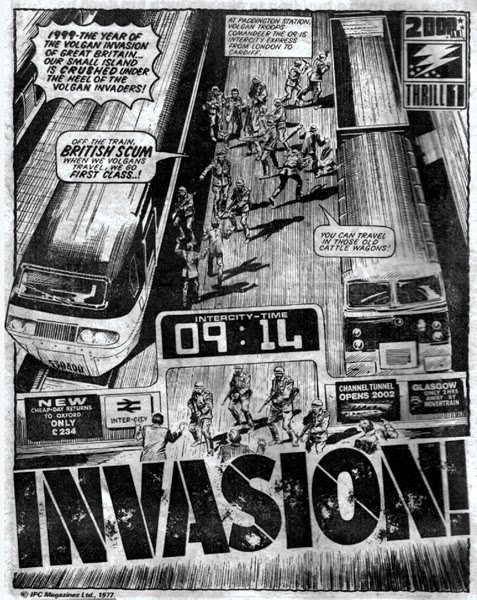 BILL SAVAGE
He poses as a railway signalman to trap a car load of Volgan troops at a level crossing just as a train full of Volgan troops passes through. The resulting crash derails the train. Volgan gun ships with Spyder troops arrives and Savage shoots one with a missile causing it to fly into another. The gun ships arrived due to a tip off from an insider. Savage promises the traitor a fair trial, but implies that he will receive the death penalty.

OTHER CHARACTERS
FIELD MARSHAL ZINSKI
Head of the Volgan army. He is killed in the train crash that Savage organises.

DEATHS
Hundreds. Zinski, the troops in his car, on the train, on two gun ships and half of Savage's men.

BEST LINES
Zinski: "What is the signalman playing at? The gates have shut again. Go and tell him to open them - Then shoot him!" 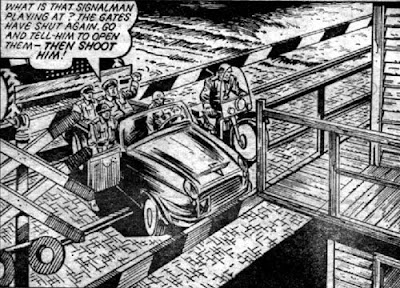 WORST LINES
Volgan trooper: "Look out! It's jumped the rails...it's blowing up!"

MISTAKES
How does Savage know the train will be full of Volgans? It was only commandeered an hour ago. Would Savage have gone ahead with his very neatly timed plan if the train were full of British citizens? Also, the Volgan propaganda is bizarrely and unflinchingly honest.

REVIEW
Here Invasion! had its most action-packed strip yet. Once again, brilliantly using the splash page to show the impact on British citizens that the Volgan occupation is having, but this time in a way that ties into the rest of the strip. Savage's trap is fantastic, albeit more than a little convenient timing-wise, the escalation of the military forces and the resulting battle are great. The matter of the traitor is handled very quickly, but I'm not certain whether it's dealt with succinctly or summarily.