REPRINTS
Extreme Edition 3, The Best Of 2000AD and Invasion!

SYNOPSIS
Savage goes on the offensive.

INFORMATION
One of the Volgan checkpoints around London is at Gant's Hill.

Trafalgar Square has been renamed Volgan Square. New Scotland Yard is now the HQ of the Volgan Secret Police. 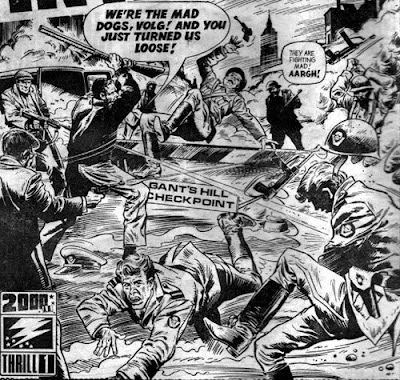 BILL SAVAGE
He leads the Mad Dogs successful attack on the Gants Hill checkpoint and continues into London. He orders the destruction of Nelson's Column and retreats to a hideout on the Isle Of Dogs.

OTHER CHARACTERS
SILK
Savage convinces him to attach several grenades to his jacket, pull the pins and throw it out of a moving van. The resulting explosion kills five Volgan soldiers pursuing on motorbikes.

BLASTER
Member of Savage's Mad Dogs. He worked in demolitions before the Volgan invasion. He rigs some stolen explosive to bring down Nelson's Column onto some approaching Volgan tanks.

BEST LINES
Silk: "I reckon Nelson would have been proud of you, Savage - you smashed his column up, but you put it to good use!" 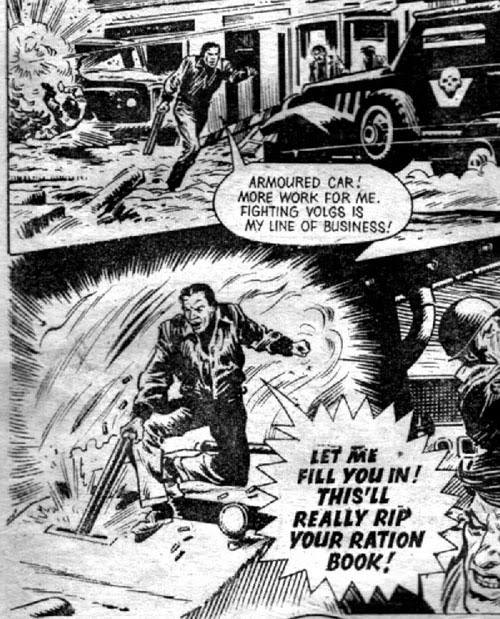 Blaster shares his moniker with another famous demolitions expert, Blaster Bates (1923–2006), who made several audio recordings of colourful stories from his career.

In addition to Invasion!, Sarompas worked on James Bond.

REVIEW
This is more like it. Another beautiful splash page opens this part, but here the artwork maintains the level of detail and action throughout.

Story Programmed For Maximum Excitement + + + See Next Prog
Posted by Dave at 10:00