SYNOPSIS
After a televised execution at Wembley Stadium, Savage goes on the offensive.

Some retail establishments are designated for Volgans only.

BILL SAVAGE
He loots a Volgan only shop in London's West End for clothes, disguises himself and his men and is rounded up to be executed. They are taken to Wembley where they attack the Volgans.

OTHER CHARACTERS
CREEPTON
He makes an address to the nation following a televised execution and threatens more deaths if the Resistance strike again. 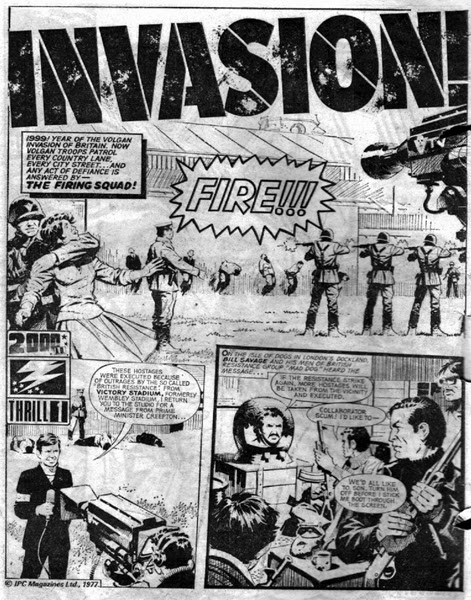 BEST LINES
Savage (to camera): "This is just a little advert for the Resistance. You've seen us play one of the qualifying matches, the big match is gonna come soon...so you know what we're gonna sing, don't you folks?" (a chorus of 'You'll Never Walk Alone')

CATCHPHRASES
Another dying Volgan gives us another "Aieee!"

INFLUENCES & REFERENCES
Wembley Stadium was opened in 1923 as the British Empire Exhibition Stadium and is well known as the venue of 77 FA Cup finals, five European Cup finals, the 1948 Summer Olympics, the 1966 World Cup Final, the final of Euro 96, Queen's Magic Tour and the 1985 Live Aid concert. 'You'll Never Walk Alone' is a show tune from the Rodgers and Hammerstein musical Carousel (1945) and is traditionally sung at Liverpool Football Club matches among others. 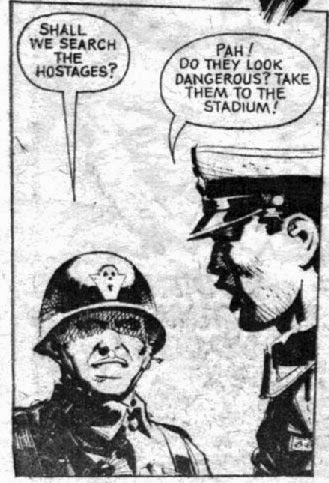 REVIEW
Savage ensures that the Volgan invasion doesn't get in the way of an English institution: football violence. This strip is pretty bizarre and that's before it ends on a song. It's pretty convenient that the Mad Dogs can get themselves taken hostage at will and that no unsuspecting civilians are drawn in as well.