SYNOPSIS
Savage and Silk take on the Volgan flagship.

INFORMATION
(This strip begins with a flashback to January 3rd 1999, and then three month later)

The Volga is the Volgan flagship. It can detect approaching frogmen and is equipped with sonic weapons.

BILL SAVAGE
He leads an attack on the Volga. He pours North Sea Oil into her and sets it alight. The resulting fire destroys the ship. 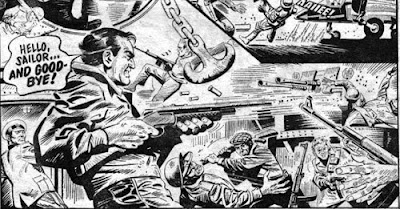 OTHER CHARACTERS
PETER SILK
Ex-Army officer. He has been trained in scuba diving and underwater demolition. He attempts to sink the Volga and is the sole survivor of the vessel's sonic weaponry. He is dragged about for interrogation.

COMMANDER GEOFF CRAIG
Friend of Silk's. He leads the Royal Navy underwater team. He is killed by the Volga's sonic weapons.

DEATHS
Presumably thousands. An unknown number must have died during the sinking of the British Navy. Five members of the Royal Navy underwater team are killed by the Volga's sonic weapons. Savage and his men kill dozens of Volgan sailors on the Volga's deck and then setting fire to her.

BEST LINES
Savage (whilst pouring oil into air vent): "The Volgs came to steal our North Sea oil and this lot are sure gonna get their share!"

CATCHPHRASES
A dying Volgan sailor misspells his "Aaiiee!", but to be fair he is probably a little distracted.

INFLUENCES & REFERENCES
After the end of the First World War, Scapa Flow saw the scuttling of the German fleet. The Volgan Admiral alludes to the lyrics of the British patriotic song, 'Rule, Britannia!' written as a poem by James Thomson (1700-1748) and set to music by Thomas Arne (1710-1778) in 1740.

REVIEW
Poor old Silk. His implied arrogance is his undoing. The action here would normally have been a set piece within another story, but instead in this strip it is the be all and the end all.