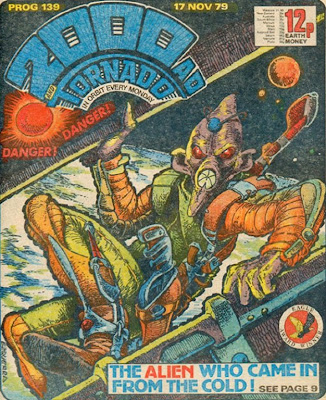 The line up for this prog also included ABC Warriors, Disaster 1990, Blackhawk, Captain Klep and The Mind Of Wolfie Smith strips and a a cover by Carlos Ezquerra

SYNOPSIS
Mega-City One's reliance on plasteen causes chaos when a bacteria that eats it arrives in town.

Plasteen is a cheap and versatile material that can be hard as rock or soft as paper. It is used in everything from buildings, hats, wigs, boots, suits, underwear, dentures, tyres, suspension cables, microphones, burglar alarms, bullet-proof security screens and artificial hearts. A bacteria that dissolves plasteen is unwittingly released. The Justice Department labs develop a chemical that kills the plasteen eating bacteria, but only if it is included in the plasteen during construction.

Inter-Space Corporation is a huge company owned by K.K. Danvers. It is blamed for the plasteen disaster. 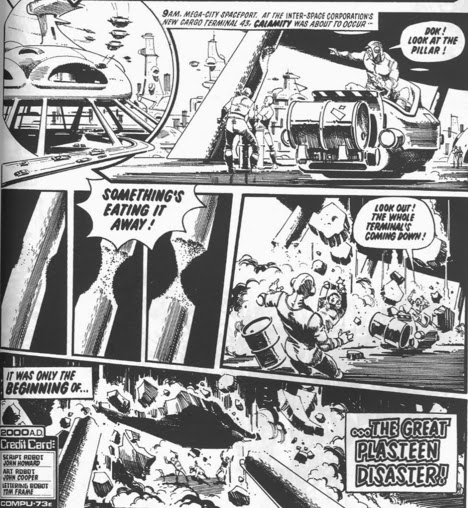 OTHER CHARACTERS
K.K. DANVERS
Billionaire owner of Inter-Space Corporation. He suffered from heart disease. Last month, he had an operation to have his own heart replaced with a artificial plasteen one and is inside an isolation tent. When angry citizens arrive to serve him writs he is exposed to contaminated air, his plasteen heart ceases to function and Danvers dies.

BEST LINES
Writ-Server: "We've got a right to serve these writs! Don't try to stop us, Judge Dredd!"
Dredd: "The thought never entered my mind."

CATCHPHRASES
An Inter-Space Corporation employee and Dredd both say "Dok!", during the plasteen-related chaos on the roads we hear an "Aieeeee!"

INFLUENCES & REFERENCES
The plot is very similar the first episode of Doomwatch called The Plastic Eaters (1970), which as the title suggests features a virus that eats plastic.

MISTAKES
The Chief Judge is presented here with dark hair, a uniform that has Chief Judge written across the front and, surprisingly, two eyes.

REVIEW
This is great. It's like a disaster movie with a domestic twist. The over-reliance on plasteen is well-realised here.