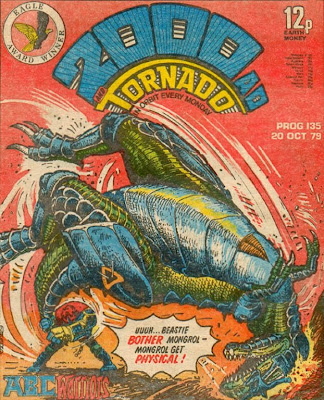 FIRSTS & LASTS
First Spont, although as yet unnamed as such.

INFORMATION
Carlos Santana Block, Chubby Checker Block, 9th Street and a branch of Smith & Clone Bankers are all in the same part of Mega-City One. Among the newspapers available are the Mega-City Standard, the Daily News and the Morning News. Jack Caldwell make Old Fashioned Umpty Candy.

Inter-Time have developed a time-warp device that slows time down and can make a second last for hours.

JUDGE DREDD
He interrogates, releases and follows Edwin Parsey to gain information about the real 'Invisible Man' and watching security footage frame by frame discovers that it is Benji Doonan. He heads to Doonan's home and shoots him dead.

OTHER CHARACTERS
EDWIN PARSEY
He lives in Carlos Santana Block. Nicknamed 'Edwin The Confessor' he regularly pleads guilty to crime he hasn't committed. He claims to be the Invisible Man and knows about the Hammond job. Under interrogation he reveals nothing, so the Judges let him go and follow him. They discover he was aware of Benji Doonan, the real 'Invisible Man' and therefore arrest him for giving false evidence and sentence him to one month imprisonment. 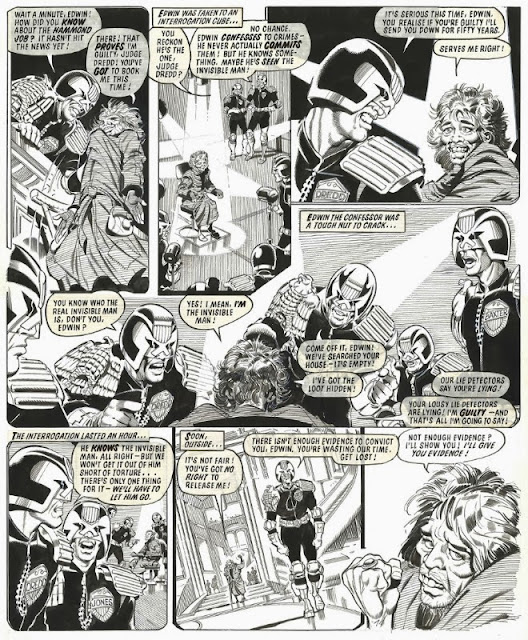 BENJI DOONAN
'The invisible man'. He lives in Chubby Checker Block and works as a cleaner at Inter-Time. He is using a time-warp device to slow down time and commit his robberies whilst to those outside the time field he would appear invisible. He has stolen from Mega-Bank, Smith & Clone Bankers, a Bullion Van and done what is described as "the Hammond Job", his thefts total 40 million credits. Dredd crashes through the window of Doonan's apartment and shoots him just as he activates his time-warp device. He takes hours to die from his wounds in the seconds it takes Dredd to turn off the machine.

ARRESTS
One. Edwin Parsey is arrested for giving false evidence and sentenced to one month imprisonment.

DEATHS
One. Dredd shoots Benji Doonan and due to the effects of his time-warp device he is unable to receives medical attention and dies of his wounds.

BEST LINES
Edwin: "It's not fair! You've got no right to release me!"

CONTINUITY & CROSSOVERS
Inter-Time could be a forerunner of Trans-Time seen in Flesh.

REVIEW
This strip is good fun, but it leaves so many unanswered questions: why was Benji Doonan taunting Dredd with notes in Part 1? How does Edwin discover that an invisible Doonan did the Hammond Job by looking through his window? That said the concept, Edwin's character and Doonan's grisly death are great.