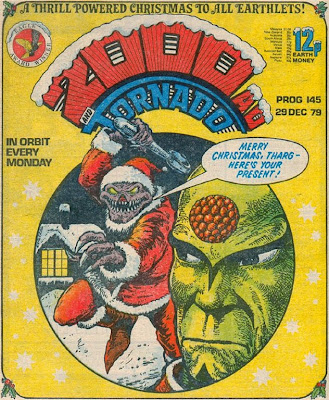 This prog also contained Blackhawk, Captain Klep, The Stainless Steel Rat, Tharg The Mighty, The V.C.'s and The Mind Of Wolfie Smith strips, a postergraph featuring The V.C.'s and a Tharg cover by Carlos Ezquerra.

INFORMATION
Mega-City One's Arnold Stang Block has a hospital with a robodoc.

Umpty Candy is the most popular confectionary of the early 22nd Century. Bat Ump, Dairy Ump, Five Umps, Mivvump, Opal Umps, Sherbet Umpty, Suck Ump, Ump Dust, Ump Gums, Ump Lump, Ump Magic, Umpties, Umpty Bar, Umpty Chews and Umpty Street are among the available products. Uncle Ump's Umpty Candy Factory has been open for a few months and sales have rocketed, causing all the competitors sales to fall. It is deemed to tasty that it ids addictive and withdrawal symptoms include hallucinations and hysteria.

JUDGE DREDD
He is present when a riot begins at Uncle Ump's Umpty Candy Factory and begins to investigate.

OTHER CHARACTERS
UNCLE UMP
Uncle Ump opened his Umpty Candy Factory a few months ago and sales have rocketed, causing all the competitors sales to fall. The recipe for his Umpty Candy is so tasty is addictive and the Judges decides to exile him to life on a spacecraft and tell the population of Mega-City One that he had died without passing on the recipe.

BEST LINES
Dredd: "I'm sorry, Citizen. Sometimes it is the innocent who must suffer."

WORST LINES
Dredd: "Rot this stuff! It's hard to stop eating it!"

INFLUENCES & REFERENCES
The story calls Charlie And The Chocolate Factory (1964) to mind. Uncle Ump dresses like Uncle Sam, a national personification of the American government that, apparently, came into use during the War of 1812. Arnold Stang Block is named after Arnold Stang (1918–2009) an actor who provided among other things the voice of Top Cat (1961-1962).

REVIEW
Another craze hits Mega-City One, but this time causes riots by being too good. Once removed it causes riots all over again. This is another riff on the main theme of 'Christmas Comes To Des O'Connor Block', that too much of a good thing is bad for you, but what this strip lacks if sympathy for the victims it more than makes up for in the extraordinary lengths Dredd goes to prevent Uncle Ump's recipe being used again.