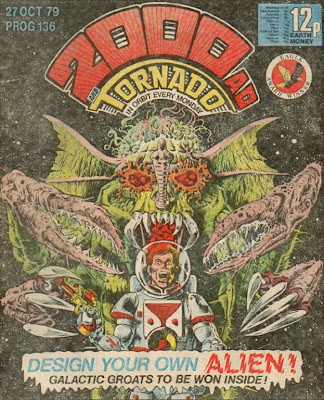 This prog also featured ABC Warriors, Disaster 1990, Blackhawk and The Mind Of Wolfie Smith strips, a Captain Klep Star Pin-Up and a cover by Massimo Belardinelli.

FIRSTS & LASTS
First use of Boing® and indeed first fad to sweep Mega-City One.

INFORMATION
Mega-City One has a Palais de Boing®. Mega-Power is a power company. The Megaton Hotel has 5000 floors. West Mutieland Turnpike is near the West Wall.

Boing® is a new spray which surrounds an individual with a breathable membrane that puts them at the centre of a bouncing bubble. Its use isd only permitted in an approved Palais de Boing®. It is proving very popular in Mega-City One. Fire alters the chemical composition of Boing® and it sticks the next surface it hits. Following a series of deaths in an outdoor Boing, the Judges pass a new law stating that the product is for adults only and the penalty for improper use is twenty years.

JUDGE DREDD
He witnesses the death of Judge Parker and follows the three responsible Boingers. He traps one on the road and allows another to bounce out over the Cursed Earth. He arrests them both and one of their fathers.

OTHER CHARACTERS
JUDGE PARKER
He is killed by a pair of illegal Boingers. 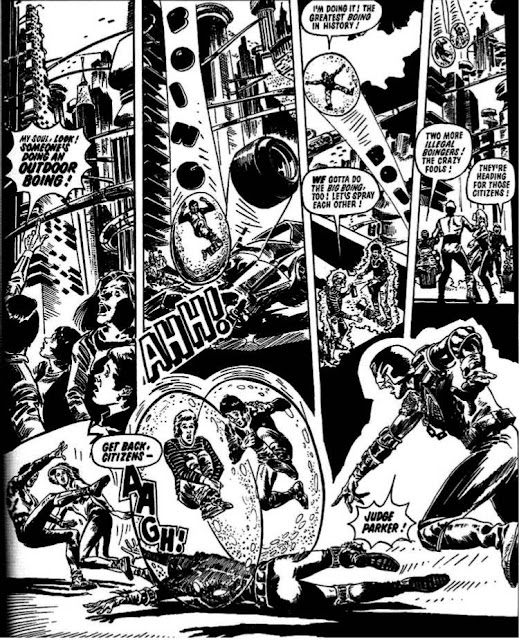 ARRESTS
Presumably three. We see one of the Boingers arrested by Dredd and sent to a correction block (presumably the other one is as well) and Dredd also arrests one of their fathers for attempting to bribe him.

DEATHS
Fifteen. Judge Parker is squashed by an illegal Boing, five people are knocked out of a hover vehicle at great height and one of the Boingers is electrocuted is what is apparently referred to as terminal Boing®.

BEST LINES
Bridle (as he witnesses a Boinger bouncing out over the Cursed Earth): "I've seen everything now!"

CONTINUITY & CROSSOVERS
There's a mention of the tyrant Cal building a huge wall.

REVIEW
This is inspired, witty and very enjoyable. Each page surpasses its predecessor: the opening advert is fantastic, but deliberate misuse is better, the killing of a Judge up the stakes, but Terminal Boing® is brilliantly ludicrous, a Boinger bouncing out obver the Cursed Earth is excellent and in any other strip would be the absolute highlight, but following that up with a band of Muties worshipping the still trapped Boinger as a God is hilarious.