As a result of the appearances of Satanus and Old One Eye in The Cursed Earth, it's time to take a look at Flesh...

SYNOPSIS
Craving the taste of flesh, the people of the 23rd century send rangers back 65 million years to herd dinosaurs for their meat.

INFORMATION
By the 23rd Century most animals have been destroyed and people survived on synthetic foods, but the discovery of time travel changed that.

The Trans-Time Corporation uses time travel to go back 65 million years and hunt dinosaurs, like Styracosaur, for their flesh. The company operates a base in the past to slaughter and process the meat and then beam it to the 23rd century.

Herder vehicles have two very large tyres and are designed to absorb shock.

EARL REAGAN
He works for Trans-Time Corporation as the boss of the rangers who drove herds of herbivorous dinosaurs. He uses an electric whip to turn the stampede away from danger.

OTHER CHARACTERS
JOE BRONTOWSKI
He works for Trans-Time Corporation and has just joined Reagan's crew. He shoots a tyrannosaur in the face and its head explodes.

MAVERICK
He works for Trans-Time Corporation. He is eaten alive by a Phobosuchus during his last tour of duty. 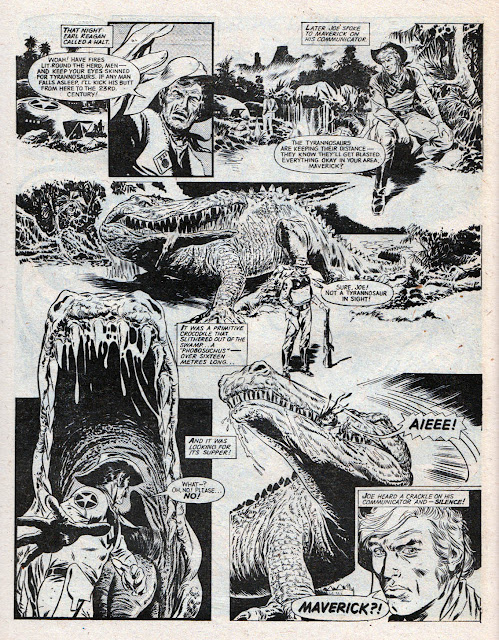 DEATHS
At least five. Maverick is eaten by a Phobosuchus, while Joe shoots a Tyrannosaur's head off. At least three Styracosaurs fall off the edge of the cliff during the stampede. Joe says that twenty rangers (not including Maverick) and six Styracosaurs were killed. 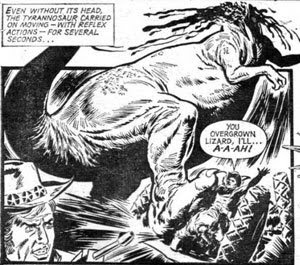 WORST LINES
Maverick: "Man's always needed meat, Joe. Forget your feelings. In this hell world you gotta be tough to survive. I'm glad it's my last tour of duty and I'm going home."

It's not necessarily bad dialogue, but it screams "I will die on the next page!".

INFLUENCES & REFERENCES
The Beast Of Hollow Mountain (1956) and The Valley Of Gwangi (1969) are both SF Westerns featuring dinosaurs.

The genus name Phobosuchus was coined in 1924, has since been discarded because it was applied to several different crocodilian species that turned out to not be closely related to each other. It has since been largely replaced by Deinosuchus. It was an alligator that lived 80 to 73 million years ago during the late Cretaceous period in what is now North America.

Tyrannosaurs had large olfactory bulbs and nerves relative to size of their brain size, which suggests that they did indeed have a highly developed sense of smell.

MISTAKES
It's not fair to label referring to a Deinosuchus as a Phobosuchus in 1977 as a mistake, so I won't.

Boix is Joan Boix, who also was part of Team Fantomen providing art for The Phantom. He has a blog here.


REVIEW
Cowboys versus dinosaurs is quite simply one of the best ideas anybody has ever had. Ever. The idea of the future preying on the past and the attitudes to humans as carnivores are intriguing. This manages to be intelligent yet full of gory action.
Posted by Dave at 10:00