FIRSTS & LASTS
First time that a story has reached nine parts and the first appearances of Dredd's log, alien life and Tweak.

The Mississippi river is a foul-smelling river of fire, polluted with petrol and nuclear waste from the Great Atomic War. There was an alien nature reserve near the Mississippi, but when the war began the specimens were sold off as slave labour. 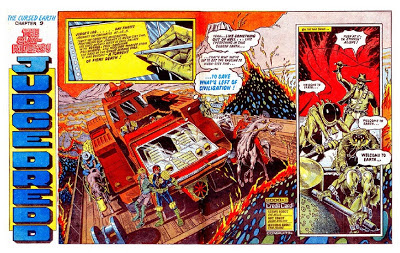 The Slay-Riders retrieve any runaway slaves. They are a group of mutants, lead by the Alien Catcher General that ride an array of mutant steeds.

Robo-Navvies are a mechanised workforce.

JUDGE DREDD
He keeps a log of the journey. His reputation has reached the Mississippi (at least at co-ordinates A7..L5..3). He helps Tweak after he escapes from captivity. He fights and kills a Slay-Rider to protect Tweak. The two of them are attacked by the Slay-Riders napalm throwers.

TWEAK
An alien life-form. Tweak eats rocks and has incredibly strong pincers. He is a slave, until he encounters Dredd and escapes that night. He evades the slay-riders long enough to find Dredd. He is recaptured, but Dredd rescues him. The pair are attacked by the Slay-Riders napalm throwers.

DEATHS
At least four. Dredd shoots a Slay-Rider dead with his bike cannon, while the weapons on the land-raider kills two steeds and one rider.

WORST LINES
Slaver: "Jodie, when the cages are all mucked out. Check they're locked tight. Don't want to have to call out the Slay-Riders after any runners."
Jodie: "Sure, Boss. Ain't nothin' getting' out o' here tonight."

CATCHPHRASES
Tweak says Twurp three times and Twaaark once, while Dredd returns to "I am the law!".

CONTINUITY & CROSSOVERS
The Slay-Riders were mentioned in The Cursed Earth, Part Four.

INFLUENCES & REFERENCES
Slay-Riders is a pun on Sleigh Ride, which is the name of a famous orchestral piece composed by Leroy Anderson, who had the idea for the piece during a heat wave in 1946, he finished it in February 1948 and the orchestral version was first recorded in 1949 by Arthur Fiedler and The Boston Pops Orchestra. Lyrics were written by Mitchell Parish in 1950.

The cages and the washing down of their occupants resembles a scene from Planet Of The Apes (1968). The Alien Catcher General recalls the Witchfinder General. He wears a smiley (☺) badge, the smiley was apparently created in the USA in 1962 and initially meant to represent genuine happiness, but by 1978 it became, after years of cynical marketing and branding, a hollow symbol that now had the opposite meaning, while in the UK it accompanied psychedelic drug culture. He is also wearing a gollywog badge of a sort similar to those given away with Robertson's Marmalade between 1910 and 2002. Yes, 2002. The debate over whether gollywogs are an innocent toy or a racist caricature periodically rears its head. For the record, it's the latter. 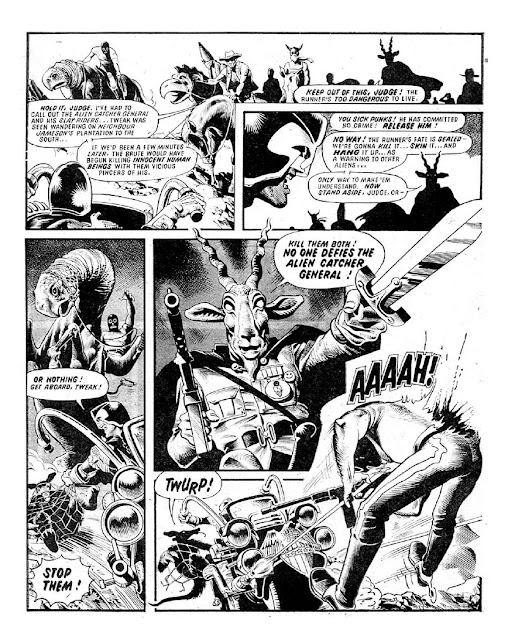 MISTAKES
The prose style in Dredd's logbook is surprisingly florid.

RETROSPECT
One of Slay-Rider's steeds appears to be cross between a horse and Tyrannosaurus Rex.

REVIEW
On the face of it, the moral of this section is that slavery is wrong, but to write this off accordingly is to do it a disservice. The Slay-Riders are mutants, and brilliantly realised mutants on brilliantly realised steeds at that. Mutants who would be second class citizens in Mega-City One exerting power over creatures that have travelled thousands of light years. The slaves have become the enslavers. Tweak is a masterstroke of design and may well be the cutest individual to appear in comics ever.