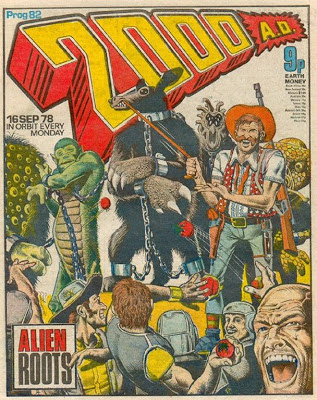 INFORMATION
There are plantations near the Mississippi river. 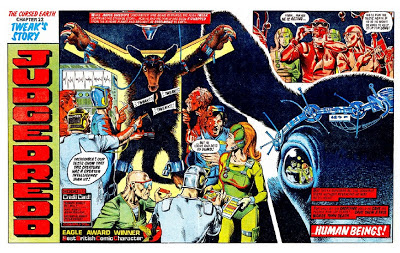 JUDGE DREDD
He listens to Tweak's story and subsequent prediction.

OTHER CHARACTERS
TWEAK
Human scientists did several intelligence tests on him, which he deliberately failed to protect his people from human interaction.
He was sold into slavery to work for a ferry owner. Tweak escaped, but too late to be reunited with his family and he buried them in a rock covered grave as food for the afterlife.

TWEAK'S MATE
She and her two young were sold into slavery on a plantation. She worked in the fields, while her offspring were kept as pets for, Sophie, the plantation owner's daughter. Sophie was bitten by one of Tweak's young whilst she tried to dress them and with her pre-cognisance, Tweak's mate could see that her children were about to be shot. She came to their rescue and was killed with them, but not before she had killed the plantation owner. 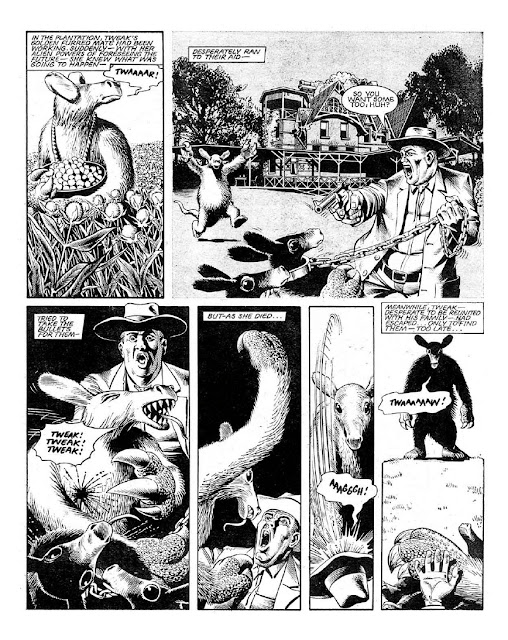 SPIKES 'HARVEY' ROTTEN
He was raised in Mega-City One. Tweak signs over half a planet to him, but predicts that he will die in Death Valley.

JUDGE JACK
He has fixed the land-raider.

DEATHS
Four. Tweak's mate and two children were shot dead by the plantation owner, and with her dying breath Tweak's mate got her own back.

BEST LINES
Tweak: "Willllll it make you happy, Spiiiiiiiikes?"
Spikes: "Yahooo! I own half a planet...Me, Spikes Harvey Rotten, raised in the gutters of Mega-City One! I'll be a somebody at last! First punk billionaire- Wiv solid gold earrings!"

WORST LINES
Scientist: "The thick brute doesn't understand weapons either - He's pointing the gun at himself!"

You gave him a gun? Count yourself lucky that he's pointing it at himself.

CONTINUITY & CROSSOVERS
Again this is a prequel to Chapter Nine.

REVIEW
'The Bit With Tweak's Back Story' risks outstaying its welcome showing us events that Dredd had supposed in Chapter Ten, but the sumptuous Bolland artwork and the prediction of Spikes' death save it.