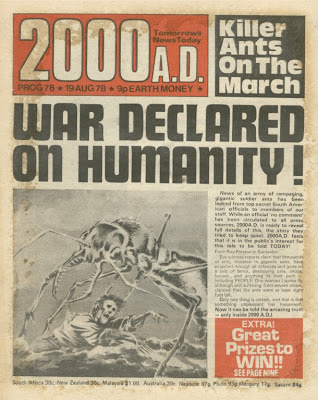 SYNOPSIS
Dredd and friends escape Gribbon and his trademarked workforce.

FIRSTS & LASTS
First time that a story has reached eighteen parts and the last of the banned strips.

Gribbon's farm was built on the site of a pre-Atomic War Government Agricultural Research Station. It burns to the ground and he and his creatures are all killed. 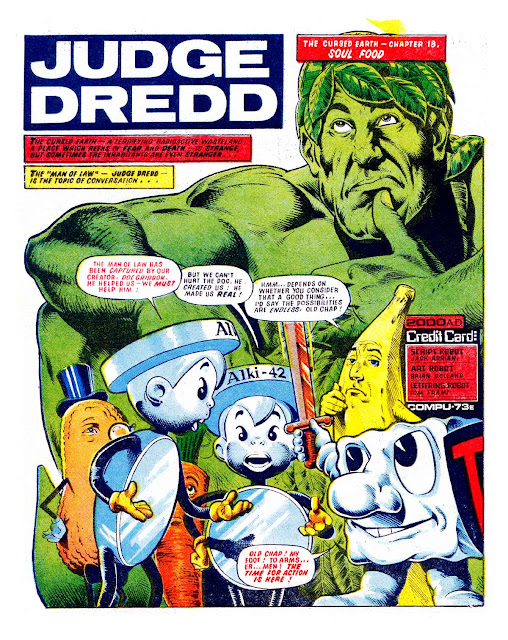 JUDGE DREDD
He has been drugged, when he comes around he attacks Doctor Gribbon, escapes his bonds and discovers the doctor's inspiration for his creatures. Gribbon shoots him in the left shoulder.

OTHER CHARACTERS
DOCTOR GRIBBON
He took inspiration for his creatures from pre-Atomic War advertising. Dredd incapacitates him and escapes, but Gribbon traps him with Spikes and Jack in a concrete corridor with the walls closing in. He is later killed by a tablet-kid powder jam that caused his gun to explode.

TWEAK
He eats his way through a concrete wall to save Dredd, Spikes and Jack. The impurities in the rock give him indigestion.

DEATHS
At least 48. Dredd pops a Michelin Man-style creature. Elmer and Abner are killed when the Solar Power explodes as are all the creatures attacking them (I count 43). Gribbon shoots two of the Tablet-kids dead, one of whom jams the barrel of his gun and the doctor is killed when it explodes.

Why is he saying this? Surely, this is a sound effect.

CATCHPHRASES
Another "Drokk it!" from Dredd, while Tweak says "Twark!" three times, "Tweak" twice and "Twurk" once and one of the green giants laughs a potentially copyrighted "Ho ho ho!".

INFLUENCES & REFERENCES
Soul food is a form of African American cuisine which is influenced by food of West Africa, Louisiana Creole and the Southern United States. "Tiens!" is French for "Hey!"

MISTAKES
The Michelin Man style creature fires at Judges Dredd and Jack with their own Lawgivers with none of the self-destructing ill effects established in Judge Dredd: 'The Wreath Murders'.

RETROSPECT
The threat of legal action from the owners of the Jolly Green Giant caused IPC to promise that neither this strip, nor its predecessor, would ever be reprinted. In addition, an apology strip would be published in Prog 84.

REVIEW
The eccentric set up of chapter 17 at least gave the impression that we were onto something interesting. Sadly it was not to be. This wasn't worth the prospect of the legal action, Dredd's moralising at the end is very awkward and the best thing about 'The Banned Bit With Corporate Mascots' is that its superfluity means that The Cursed Earth can still be enjoyed without it. 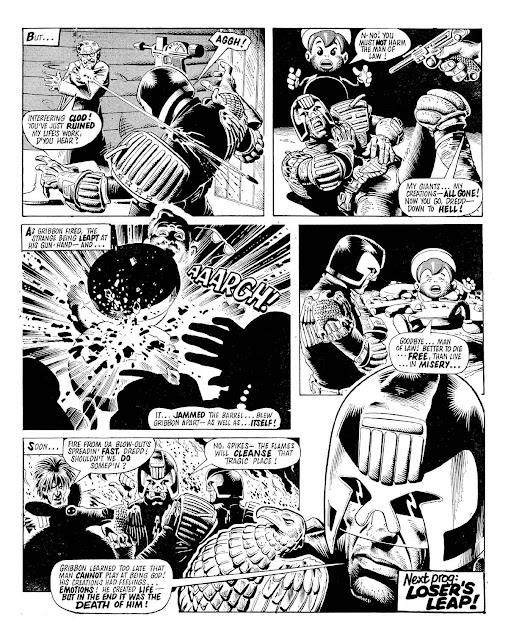