Judge Dredd: The Cursed Earth, Chapter 13 – The Coming Of Satanus!

SYNOPSIS
Dredd encounters fleeing dinosaurs and is stalked by their predator.

FIRSTS & LASTS
First time that a story has reached thirteen parts and the first appearance of Satanus.

INFORMATION
The Dinosaur National Park brought back several species of dinosaur using genetic engineering. When the Atomic War (possibly also referred to as World War Three) affected the area the specimens were able to roam freely. Among the dinosaurs recreated are Styracosaurus, Diplodocus, Stegosaurus, Triceratops, Pterodactyl and Tyrannosaurus Rex.

Repentance is a town a few miles away from Dinosaur National Park. 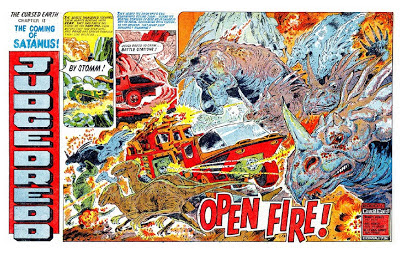 JUDGE DREDD
He is suspicious of people he deems too friendly.

OTHER CHARACTERS
SATANUS
A black Tyrannosaurus Rex with red eyes. His DNA was cloned from a fossil in the Colorado Desert and the cells were injected into alligator eggs. He was the only T-Rex of a batch of 4 to successfully hatch from the egg and within seconds he was walking and bit a scientist's finger. He was initially fed on sheep, then cattle and at one point a cat. An attempt to cut down his food intake resulted in one of the scientists losing a leg. He refused to eat a soya meat substitute. When the Dinosaur National Park opened he was the star attraction and fed on drugged meat to keep him docile. Until one day, a keeper forgot to drug the meat and Satanus made an escape attempt with two Hairy Tyrannosaurs eating seven tourists in the process. When recaptured he saw his fellow escapees sedated, but he resisted and escaped a second time into the mountains. Six rangers went in search of him and failed to return. He has possibly become known as the Dark One. He follows Dredd's land-raider to the town of Repentence, which Satanus regards as his 'special place'. 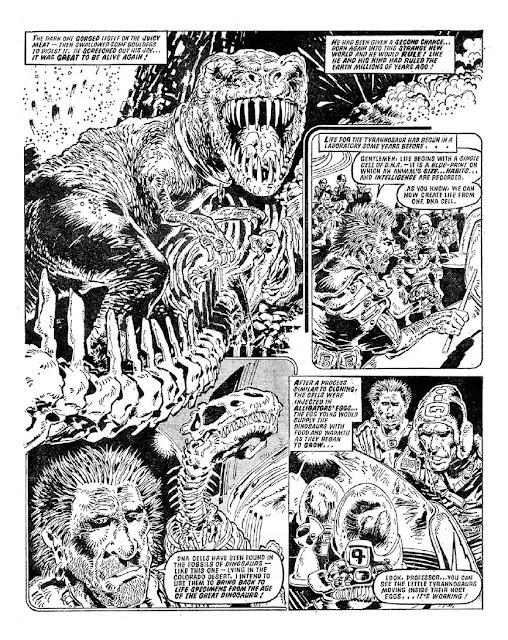 DEATHS
At least fourteen. A Styracosaur is eaten alive by Satanus in the present, while in flashback he eats sheep, cattle, a cat and at least thirteen people between panels.

BEST LINES
Spikes: "I thought it was meant to stand up to anything, Judgey."
Dredd: "Guess no-one told the manufacturer about stampeding dinosaurs!"

WORST LINES
Judge Jack: "...Like something out of Hell!"

RETROSPECT
The use of genetic engineering from fossil DNA to bring back the dinosaurs will later be a central tenet of Michael Crichton's Jurassic Park novel (1990) and subsequent film (1993).

REVIEW
'The Bit With The Dinosaurs' barely features Dredd as it gets underway with an extended flashback. It's clear this is the prologue to a story of much larger scope. The dinosaurs look great and the Jurassic Park comparison is eerily close.