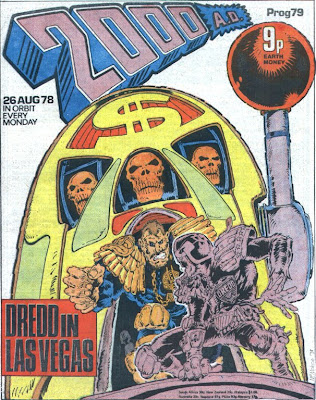 This Prog bore a Judge Dredd cover by Mike McMahon, and also featured Ant Wars, Dan Dare, Robo-Hunter and Walter The Wobot strips, alongside the fifth part of the Cursed Earth board game.

FIRSTS & LASTS
First time that a story has reached nineteen parts and first example of a mutant Judge.

INFORMATION
After the Great War, Las Vegas was taken over by the Syndicate, which runs the Judges and the gambling. Citizens can gamble on the outcome of tank battles, dice games, roulette, criminal sentencing and methods of execution. Their equivalent of the Chief Judge is known as the God Judge, their Hall Of Justice is a casino and their sentencing sometimes a game of chance: individuals might be asked to pick a card and different cards have different outcomes, for example a deuce would result in the being buried alive. Other crimes result in a jump from Loser's Leap, an elevated aperture high up in the Hall Of Justice that 'Losers' are forced to jump through to the deaths and onto a target with bets taken on their final position. Their unit of currency is the Cred. Named Las Vegas Judges: Judge Fingers.

The League Against Gambling is an illegal organisation that is anti-gambling. 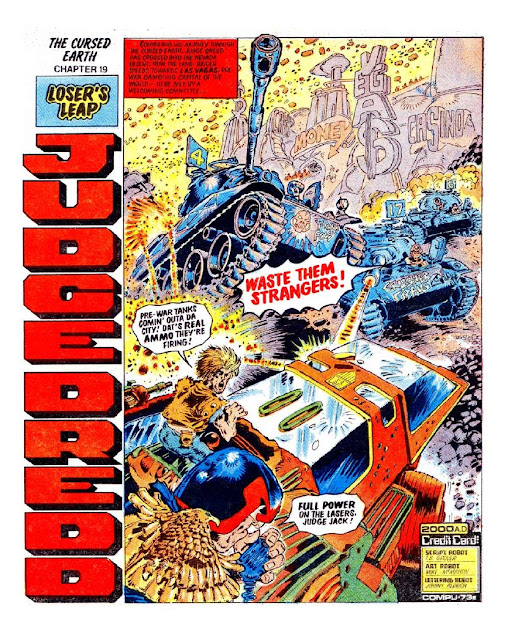 JUDGE DREDD
He is appalled by the Las Vegas Judges and confront them. They force him to prepare to jump Loser's Leap.

OTHER CHARACTERS
SPIKES 'HARVEY' ROTTEN
He has always wanted to see Las Vegas.

THE GOD JUDGE
He is in charge of Las Vegas. He tries criminal cases in the Grand Hall of the city's Hall Of Justice.

ARRESTS
One. The God Judge sentences one man for being a member of the League Against Gambling to being buried alive.

DEATHS
One. A suicidal jump off Loser's Leap.

WORST LINES
Spikes: "Crazy, man! Dey all had numbers on their tanks like dey was in some kinda contest."

CATCHPHRASES
Dredd says "M-my Dok!" at the sight of the Las Vegas Halls Of Justice.

INFLUENCES & REFERENCES
Mario Puzo's 1969 novel The Godfather, its film adaption of the same name in 1972 and the film's 1974 sequel, The Godfather, Part II, all feature the Mafia and their contribution to Las Vegas.

MISTAKES
The city's name is mis-spelt Las Vagas on the first page (above). 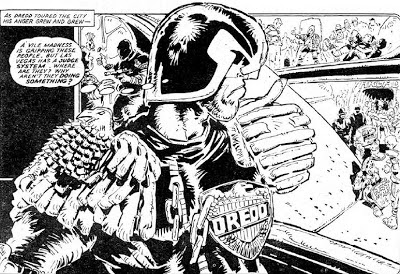 REVIEW
'The Bit In Las Vegas' starts oddly with some confusing tank choreography, but the city, its warped version of the Judge system and its ability to seize every opportunity to gamble is great.