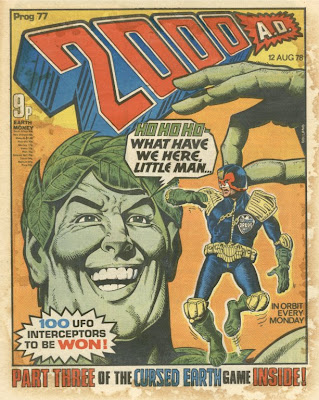 SYNOPSIS
Dredd encounters some copyright infringing mascots and is drugged.

INFORMATION
In the middle of the Great Utah Dustbowl lies a grassland and a farm, which is home to a variety of creatures from green giants to soluble people. 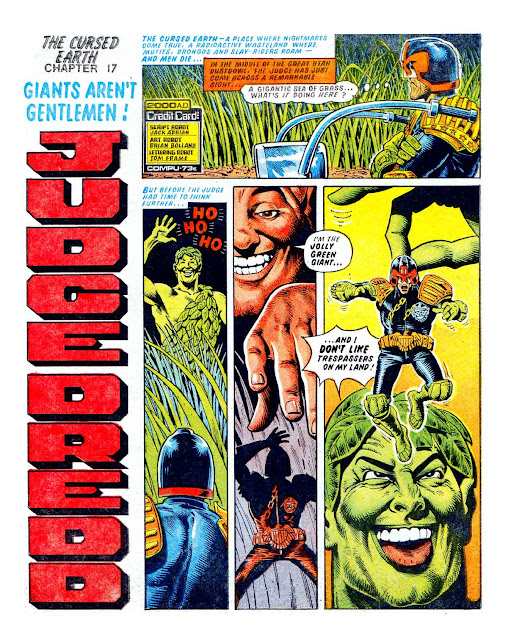 In 2093, Gribbon's farm produced a Blueberry and Mesquite wine, which he will one day describe as "a rather vivacious vintage!"

JUDGE DREDD
He is almost eaten by a giant. He is drugged by Gribbon.

OTHER CHARACTERS
SPIKES 'HARVEY' ROTTEN
He is drugged by Gribbon.

GRIBBON
He runs a farm in the Great Utah Dustbowl. He plans to extract gland fluids from Dredd and Spikes via brain surgery to feed his creatures.

BEST LINES
Farmhand: "Quit, strugglin', brat! It's the big fizz for you!"

WORST LINES
Spikes: "(Ha Ha) Even better than matchsticks under the toenails!"

INFLUENCES & REFERENCES
Elmer and Abner would struggle to look more like the Minnesota Valley Canning Company's mascot for Green Giant Vegetables since 1928 and one of them even says "I'm the Jolly Green Giant..." Alkis-4 9, 25 and 42 look very much like Speedy the face of Alka Seltzer since 1951. Gribbon looks dangerously close to Kentucky Fried Chicken's Colonel modelled on founder Harland Sanders (1890–1980). Mr Peanut is the company logo for Planters Peanuts created via a 1916 competition by a fourteen year-old schoolboy named Antonio Gentile and another artist who added the spats, top hat, monocle and cane. The Michelin Man is the symbol of the Michelin tire company since 1894 and one of the world's oldest trademarks, his name is Bibendum and apparently comes from the slogan "Nunc est bibendum", which bizarrely means "Now is the time to drink". 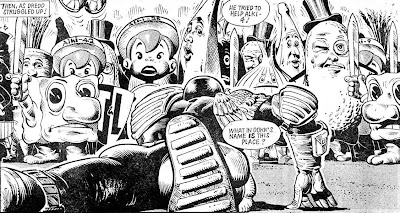 MISTAKES
Spikes describes their journey so far as "a thousand miles of hell on Earth", but they've driven about twice that.

NOTES
The gland fluids which the creatures feed on must go pretty far, because Gribbon say they haven't had any visitors for many years.

Jack Adrian is a pseudonym used by Chris Lowder. This instalment of The Cursed Earth and its successor were the only Judge Dredd strips that Lowder scripted, but he also wrote two text stories for Judge Dredd annuals. He also wrote for Dan Dare, Invasion, Tharg's Future Shocks, Timequake, Ro-Busters, a one-off called The Great Detective Caper and plenty of Time Twisters.

REVIEW
What were they thinking? This is beyond odd. It's like an adaptation of The Island Of Doctor Moreau with the cast drawn exclusively from corporate mascots with the express hope of getting sued. In its favour, Brian Bolland's artwork is beautiful as ever.