SYNOPSIS
After a visit to the Flesh processing facility, Joe is attacked by a Pterandon.

INFORMATION
Dinosaurs are humanely stunned before they are dropped into the fleshdozer and turned into pre-packaged Flesh. Trans-Time rangers use spotter planes and air buggies, and are armed with power-assisted lassoes, blaster guns and electric goads. Alamosaurus are referred to by the nickname 'pinheads'. 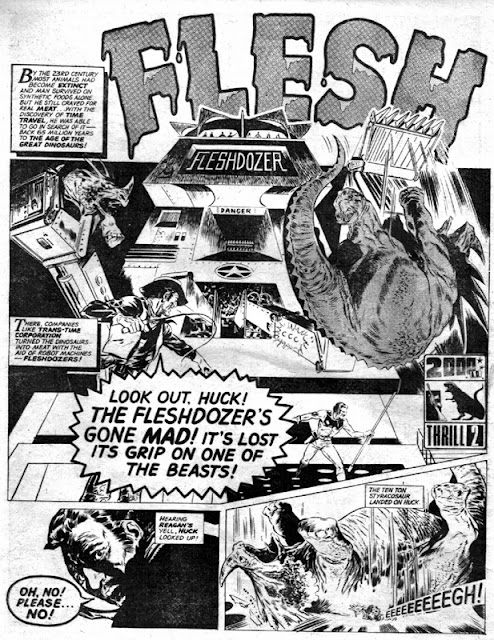 EARL REAGAN
He is still impressed by the time travel device which sends the Flesh to the 23rd Century.

OTHER CHARACTERS
JOE BRONTOWSKI
He is attacked by a Pteranodon.

HUCK
Trans-Time Corporation employee. He is killed by a falling Styracosaur corpse.

DEATHS
Three. Huck is killed by a falling Styracosaur. The Styracosaur and Huck's friend are dropped into the Fleshdozer alive.

BEST LINES
Joe: "Carved up by the Fleshdozer! What away to go, boss!"
Reagan: "Yeah! He'll be turned into pre-packaged Flesh just like the Styracosaur."

WORST LINES
Joe: "It's gone!"
Reagan: "To the twenty-third century, where we comes from. Seen it happen a thousand time before - but it's still a miracle to a simple ranger like me."

INFLUENCES & REFERENCES
The use of the words beamed and energise to describe teleportation recalls the transporter from Star Trek (1966-1969), although it wasn't used for time travel.

MISTAKES
Pteranodon had no teeth and the plural form of lasso is lassos.

In addition to Flesh, Ken Armstrong also wrote for Dan Dare and The Mind Of Wolfie Smith.

REVIEW
The Fleshdozer and the dinosaur attack are fantastic set pieces. Any comic strip that ends with a man attempting to strangle a Pteranodon is on to a winner. Flesh is shaping up to be very interesting.

Thrill Value Increases + + + Next Programme
Posted by Dave at 10:00