SYNOPSIS
Believing him to be a Vampire, Ikkabod tries to take revenge on the last President of the United States of America.

INFORMATION
In 2070, the American President Robert L. Booth pushed the button that began the Atomic Wars. Millions died and there were protests calling for his resignation and for his powers to be handed to the Judges, genetically chosen to be tough, but fair. Booth was tried before a Grand Council of Judges and found guilty of war crimes. His sentence was a hundred years of suspended animation, interred at Fort Knox with a trio of Medic Droids programmed to obey the Judges. Booth became the last President of the United States of America, by order of the Judges who took over the running of the country.

The Medic Robots checked and changed Booth's blood until Fort Knox was hit by a bomb that destroyed their supply of blood. The robots were forced to look further afield for their blood and the legend of a Kentucky vampire grew. 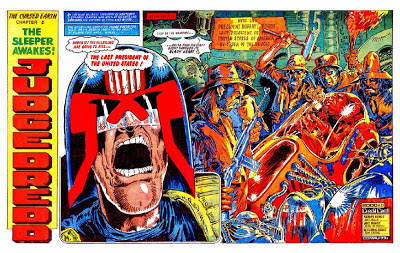 JUDGE DREDD
He convinces the Medic Robots to end their attack, descends to the lower level and prevents Ikkabod from killing Booth. He changes Booth's sentence to life.

OTHER CHARACTERS
ROBERT L. BOOTH
He was President of the United States of America in 2070, nicknamed Smooth Booth. He started the Atomic Wars, which lead to calls for his resignation and a trial before a Grand Council of Judges. Booth was found guilty of war crimes and sentenced to a hundred years in suspended animation at Fort Knox.

He was awoken and released in 2100 by a group who thought him to be a vampire. He begged not to be returned to suspended animation for another seventy years. Judge Dredd hears his appeal, changes his sentence to life and orders him to grow crops in the Cursed Earth under Ikkabod's watchful eye. 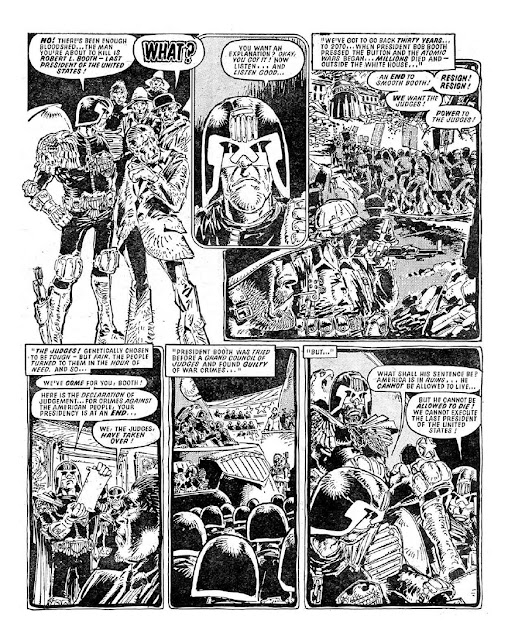 JUDGE SOLOMON
He presided over Booth's trial and sentenced him to hundred years in suspended animation.

SNAP, CRACKLE AND POP
Names Dredd gives to Booth's three Medic Robots. They checked and changed Booth's blood until a bomb hit Fort Know and destroyed their blood supply, their programming forced them to search for blood elsewhere which caused the legend of the Kentucky vampire. Dredd orders that they are to be reprogrammed to help re-cultivate the Cursed Earth.

IKKABOD
He promises to keep an eye on Booth.

WORST LINES
Dredd: "You want an explanation? Okay, you got it! Now listen...and listen good..."

CONTINUITY & CROSSOVERS
Dredd refers to Walter as "that metal freak I left behind in Mega-City One", Walter was last seen in Judge Dredd: Firebug.

INFLUENCES & REFERENCES
The Watergate scandal and President Richard M. Nixon's subsequent impeachment presumably served as inspiration for Booth's fall from grace. Dredd dubs the Medic robot trio Snap, Crackle and Pop which are the names of the three elf mascots seen on boxes of Kellogg's Rice Krispies since 1933. He also mentions Count Dracula who famously appeared in Bram Stoker's 1897 novel and numerous films.

RETROSPECT
President Booth will become a significant character later on.

REVIEW
The resolution to 'The Bit With The Vampire' is far more rewarding than expected. In a beautiful example of world building, the flashback provides a fascinating insight into the last days of America, the arrival of the Judges and Robert L. Booth as a name for a US President somehow just sounds right.