NAME
Harlem Heroes, Part 12 (according to Wikipedia, this is the first part of a strip also known as 'The Flying Scotsmen')

FIRSTS & LASTS
The first appearance of The Flying Scotsmen, last mention of Sammy

INFORMATION
(This part takes place "a few days" after Part 11, with the game two days after the visit to the museum)

The Museum Of Sport is a large domed shaped building with exhibits on Power Sports, Mind Sports and Luna-Sports as well as specific sports like Aeroball, Football, Spinball, 3 Minute Milers and Boxing. The Boxing exhibit includes huge statues of Muhammad Ali and Rocky the 8 foot tall mutant heavyweight champion. The museum also boasts a Solar Glider, a vehicle called Shark, the UK and USA vehicles from the Trans-America Tank Race 2001, race cars including the 1993 World Champion, facsimile magazines like Shoot! and a Tri-D Audio-Visual Complex, currently showing a film on how aeroball came to Scotland. The aeroball exhibition includes low-pressure jet-packs. 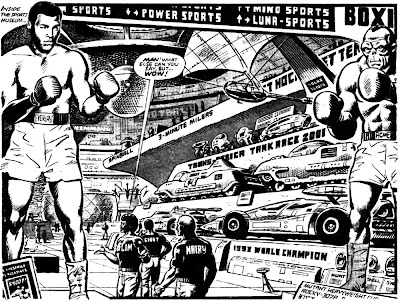 There was an oil boom in in Scotland in the 1980's and townships sprang up to exploit it. When the oil ran out those townships became ghost towns. Some oil workers turned to Aeroball and built a stadium from parts of abandoned oil rigs. Scotland is now independent.

The Flying Scotsmen or the Wild Men from Aberdeen, Scotland. Their squad leader is 'Red' Macardle. As a pre-match stunt they perform a half loop, press their gusher buttons and back-fire their jet-packs as group like a plume of crude oil. Hundreds of Flying Scotsmen supporters have travelled with them. Their fans were once labelled as the wildest, most unruly sports fans in the world.

GIANT
He has recognised Artie Gruber from his voice. Giant visits the Sport's Museum with Slim and Hairy.

SLIM
He has been with Harlem Heroes for at least two years and played in the game against the Washington Warlocks in which Artie Gruber was injured. Slim visits the Sport's museum with Giant and Hairy. He takes exception to 'Red' Macardle and hits his accelerator button and launches him into the roof of the museum.

HAIRY
He visits the Museum of Sport with Giant and Slim.

OTHER CHARACTERS
'RED' MACARDLE
He is the squad leader of the Flying Scotsmen. Macardle visits the Museum of Sport, borrows a jet-pack and poses as a projection to trick the Harlem Heroes. Slim sends him into the ceiling and the two nearly come to blows.

ARTIE GRUBER
He played aerobal for the Washington Warlocks. Two years ago, his jet-pack accidentally exploded during a game with Harlem Heroes. Although Gruber blamed the Harlem Heroes.

BEST LINES
Unidentified Harlem Hero: "...And that's what's left of one of the townships which sprang up like mushrooms during the Scottish oil boom of the 1980's!"

WORST LINES
Hairy: "...One of the Flying Scots seems to be jetting straight at us...L-like he's made of flesh-and-blood!"

This makes no sense.

CONTINUITY & CROSSOVERS
The statue of the mutant boxer in the museum implies a very different attitude towards them than will be exhibited by the year 2099 in Judge Dredd strips like 'The Brotherhood Of Darkness' and 'Mr Buzzz'.

The inclusion of Spinball in the Sport's Museum references Tom Tully's Death Game 1999 strip for Action published by IPC (as was 2000 A.D.). Whether this means that Death Game 1999 and Harlem Heroes take place in the same continuity, I couldn't say.

INFLUENCES & REFERENCES
The Flying Scotsmen take their name from the famous train, the Flying Scotsman, built in 1923 and used extensively for publicity by the London and North Eastern Railway.

No-one has yet run a three minute mile, the current world record holder is Hicham El Guerrouj from Morocco at 3:43.13 minutes.

Luna-Sports implies the the moon has been settled, but it could just as easily be a slightly odd exhibition devoted to golf and javelin, the two sports played on the moon by Alan Shepard in 1971.

Shoot! is a football magazine that has been published since 1969, and in 1977 would also have been owned by IPC.

The Audio-Visual Complex is very similar to the danger room of The X-Men comics(1963) and both the recreation room in Star Trek: The Animated Series (1974) and the holodecks of its subsequent spinoffs.

The discovery of North Sea Oil reinvigorated calls for Scottish independence and would have been very topical in 1977.

MISTAKES
Not necessarily a mistake, but the statues are not to the same scale as Muhammad Ali is depicted as taller than Rocky when in fact he was 6'3'' and therefore 21 inches shorter.

RETROSPECT
The sport's museum also houses what could be Formula One cars belonging to the 1993 World Champion, the closest thing would seem to be Alain Prost who won his fourth and final Drivers' World Championship trophy that year.

REVIEW
This is quite a change of pace, but a welcome one. The strip quite nicely ventures from Giant working out who Gruber is to the beginning of the match with the Flying Scotsmen, and the satire on Scottish oil is great.