NAME
Harlem Heroes, Part 15 (according to Wikipedia, this is the fourth and final part of a strip also known as 'The Flying Scotsmen')

SYNOPSIS
Zack and Red go head-to-head in the sudden-death fly-off.

FIRSTS & LASTS
First strip since the Harlem Heroes appearance in the 2000 AD Summer Special 1977. Last appearance of the Flying Scotsmen.

INFORMATION
The losing team in the highest scoring game qualifies for the next round of the World Aeroball Chamiponships.

The Harlem Heroes draw lots for the sudden-death fly-off with little dolls and whoever gets the skull-faced death's head doll takes part.

GIANT
He and Slim catch a falling Zack.

SLIM
He and Giant catch a falling Zack.

ZACK
He draws the death's head doll and takes part in the sudden death fly off with Red Macardle, after initially struggling he scores an air-strike and the Harlem Heroes win the game.

OTHER CHARACTERS
RED MACARDLE
He loses the sudden-death fly-off to Zack, despite trying to electrocute him on the score-tank's studs and throwing his hard hat at him and finds himself respecting the Harlem Heroes. 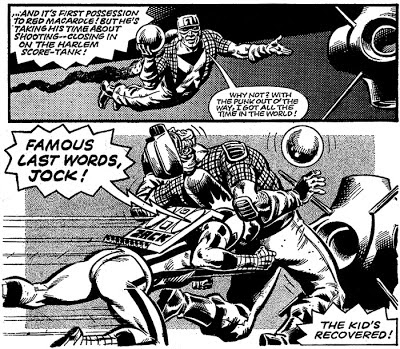 ARTIE GRUBER
His boss flies a helicopter and finds the Harlem Heroes's fans cheering the Flying Scotsmen disgusting. Artie is given another chance.

BEST LINES
Red: "I want tae shake the hand o' the wee hoolie who beat me at ma own game! If he's the 'babe' o' the team, the rest of ye must be made of Edinburgh granite!"

REVIEW
This is much better. It is refreshing to see that it's Zack, not Slim or Giant going up against Red. The action is easy to follow and the conflict between the two of them have a believable weight to it.