NAME
Harlem Heroes, Part 24 (according to Wikipedia, this is the third and final part of a strip also known as 'The Bushido Blades')

SYNOPSIS
Cord's fear is revealed and the Harlem Heroes change their tactics to beat the Bushido Blades.

INFORMATION
A cloud-burst is a manoeuvre that involves all the players of a particular team breaking formation in a different direction.

The Bushido Blades use five forwards armed with wooden kendo swords for their fiery wheel formation. 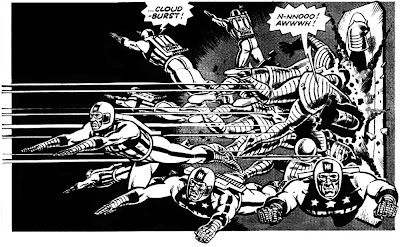 GIANT
He scores at least one air-strike.

SLIM
He scores at least one air-strike.

HAIRY
He doesn't like Louis' idea and thinks it's immoral.

ZACK
He is the first to end the ruse that the Harlem Heroes were too scared to play and gains possession of the ball.

OTHER CHARACTERS
LOUIS MAYER
His brain has become so powerful that he can reproduce recent incidents by thinking about them. It was his idea that the Harlem Heroes feign cowardice to beat the Bushido Blades. 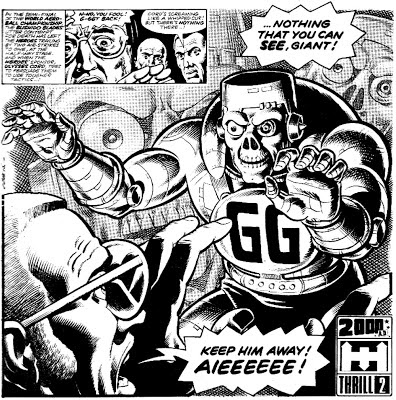 ULYSSES CORD
He faints at the thought of Artie Gruber projected into his mind.

DEATHS
None. Although the Bushido Blades injuries are probably severe.

BEST LINES
Bushido Blade: "It is beneath us to do battle with such craven, spineless cowards!"
Zack: "In that case, Sunshine, you won't be needin' this ball!"

WORST LINES
Zack: "Hey, man...no wonder Cord flipped! You zapped him with an image of Gruber!"
Louis: "Quite so, Zack! I wanted to test a little suspicion of mine!"
Giant: "What are you gettin' at, Louis?"

CATCHPHRASES
The Bushido Blades treat us to another "Banzai!"

NOTES
Shogun means "a commander of a force" and is the name given to the hereditary military dictators of Japan from 1192 to 1867. While the word Shinto means "Way of the Gods", so "By Shinto!" isn't as stupid as it first appears.

REVIEW
That this is the last part featuring the work of Dave Gibbons is sad, but it is beautiful artwork throughout and he gets to draw Artie Gruber one last time, albeit an ethereal one. I like that Louis' successful tactic is the polar opposite of that suggested by Cord in the last part, but sadly this is another strip that builds nicely via some great set piece action to a cliffhanger with no jeopardy whatsoever.