NAME
Harlem Heroes, Part 16 (according to Wikipedia, this is the first part of a strip also known as 'Gorgon's Gargoyles')

INFORMATION
Aeroball, Rule 59: "Computronic players must reduce their energy output to human levels during the game"

The Harlem Heroes play in the East Coast League, their next league match is against Gorgon's Gargoyles.

Gorgon's Gargoyles are android robots built by computronic surgeons. They have refused to wear plastic nu-faces. This is their first season in the league. 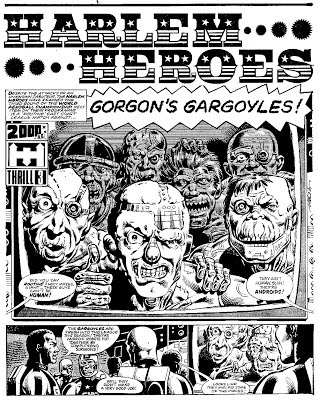 Mr Universe was an important figure in aeroball born in 2012.

ZACK
He can fly a jet-board.

OTHER CHARACTERS
ARTIE GRUBER
He has surgery to change his appearance to that of Joe 'Ugly' Mugglie. Two days later, Artie smuggles himself into Mugglie's dressing room, fights him and take his place.

JOE MUGGLIE
His nickname is 'Ugly'. He's the squad-leader for Gorgon's Gargoyles. He's always the last to appear before a game so he gets screams from the crowd all to himself.

DEATHS
It's not explicit here whether Artie kills Mugglie in their fight.

BEST LINES
Mugglie (thinks): "Someone's poundin' on the door! If it's one of them darned sports writers, hoping to catch me half-zipped..!"

WORST LINES
Buck (as Zack flies by on a jet-board): "Why ya sassy little..."

Does that count? It's not really his catchphrase, but it is a catchy phrase that we all understand.

REVIEW
This strip sets up Gorgon's Gargoyles very well and Dave Gibbons gives us great gruesomeness. It's good to have Artie Gruber back and the Gorgon's Gargoyles player pointing at him with an unattached arm that he's holding is a very nice touch.