NAME
Harlem Heroes, Part 3 (according to Wikipedia, this is the second part of a strip also known as The Baltimore Bulls)

SYNOPSIS
The Harlem Heroes play their first game since the crash.

FIRSTS & LASTS
The first strip to end mid-game and with a perilous cliffhanger.

INFORMATION
A game of Aeroball begins with a blast off. Rule 28: The score-holes of the 'tank' are surrounded by by electrified prods. If a player hits the prods, they must go to the penalty pen for a period of three minutes. After a penalty, the game continues after a 'free' for the opposite team. A kick in the back of the neck is a foul. A reverse shoulder pass involves a player throwing the ball from the shoulder behind them.

The Baltimore Bulls are a team made up of police officers. 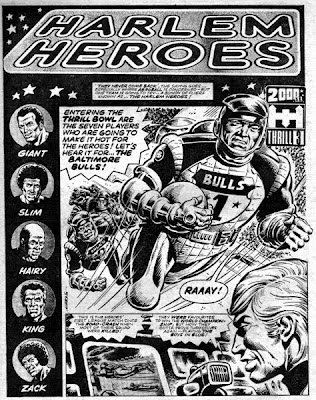 GIANT
He has to remind Zack to stay in formation. He tries for an air-strike, but the ball rebounds off the rim of the score-tank.

CONRAD KING
Harlem Heroes' 'tank minder'. He blocks an airstrike, but hits the prods on the tank and spends three minutes in the penalty pen.

ZACK HARPER
He has obviously had run-ins with the police before. He scores an airstrike, but the umpire disallows it because he kicked an opponent in the back of the neck. He overshoots and crashes into a TV camera boom at 80mph and falls.

CATCHPHRASES
Giant: "Forget it, Bulls from Baltimore, with you we're going to wipe the floor!"

REVIEW
This part focusses on the new players from last week's strip almost exclusively. Slim and Hairy don't have anything to do and the opening roll call even omits Chico and Sammy which doesn't bode well for them. The exposition is generally well-handled and the cliffhanger is great.