NAME
Harlem Heroes, Part 8
(according to Wikipedia, this is the third and final part of a strip also known as The Siberian Wolves)

SYNOPSIS
Giant survives to play another day and his team beat the Siberian Wolves. Meanwhile something sinister is happening in Mega-City One.

FIRSTS & LASTS
First appearance of Mega-City One itself and Gruber in Harlem Heroes.

The Harlem Heroes are through to the second round of the world aeroball championships. Their next fixture is a league match back in the USA.

In Mega-City One, there is a hospital laboratory where individuals in a vegetative state can be revived.

GIANT
As he is falling he grabs a passing Siberian Wolf, then scoops up the aeroball with his feet, kicks it into the scoretank and scores an airstrike. He falls again, but Slim catches him. 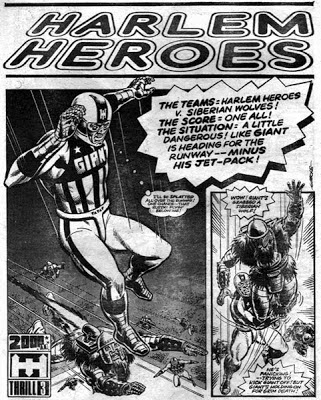 SLIM
He catches Giant the second time he falls. Slim scores an airstrike. 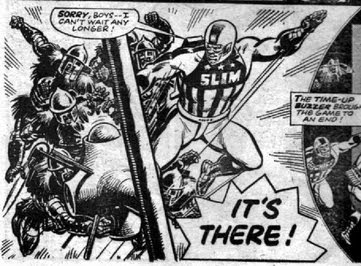 ZACK HARPER
(He looks like he's doing a black power salute as the team walk away at the end of the game.)

OTHER CHARACTERS
TUCKER
He is part of the Harlem Heroes ground crew. One of his duties is the maintenance of their jet packs.

GRUBER
He has been braindead since he dived into the ground during an aeroball match against the Harlem Heroes three years ago. Someone who wants the Harlem Heroes dead has anonymously paid two Mega-City One doctors eight million dollars to connect his cerebral motors to an electro-impulse and turn him into a cyborg. 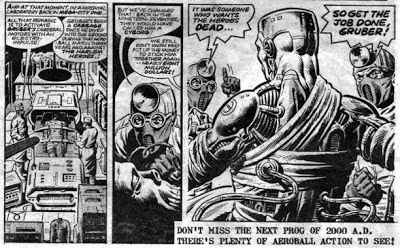 Gruber's Doctor: "Back in the nineteen-seventies, they would have called him a Cyborg!"

CATCHPHRASES
Presumably "Stava!" is Russian for something, but I can't find out what.

INFLUENCES
Slim mentions Kewpie Dolls. These are dolls based on comic strip illustrations by Rose O'Neill that first appeared in Ladies' Home Journal in 1909. The small dolls were extremely popular in the early twentieth century. I have absolutely no idea what Slim is getting at though.

REVIEW
Everything Giant does in this strip is fantastic and the prospect of a villain is a very exciting one.