NAME
Harlem Heroes, Part 6 (according to Wikipedia, this is the first part of a strip also known as The Siberian Wolves)

SYNOPSIS
The Harlem Heroes get to Russia and begin playing the very determined Siberian Wolves.

FIRSTS & LASTS
First mention of Mega-City One and first visit to another country.

INFORMATION
(It's been a "coupla weeks" since the road crash)

The Trans-Atlantic Tunnel runs under the atlantic ocean connecting the United States to Europe and Africa. It was started in 2010 A.D. and completed in 2050 A.D. At least six levels of traffic are layered one on top of the other. Oceanic Industries maintains an facility on the sea floor outside the Trans-Atlantic Tunnel. Aquatugs are underwater vehicles to aid divers. There is an Atlantic Hilton, part way along the route. Companies using the Trans-Atlantic Tunnel at the same time as Harlem Heroes include: Mills Moving, Juggernaught Trucking Corp, Acme, Stones II, Transatlantic Trucks and Barnum Circus. 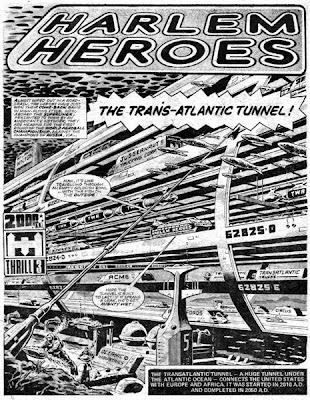 The Soviet Union still exists in some capacity. Russia only applied for membership of the World Aeroball Association five years ago. there are rumours of secret aeroball training camps in the wilds of Siberia. The Palace Of Aeroball is reportedly bigger than the Kremlin. The Siberian Wolves field at least thirty substitutes and wear armour with CCCP written on it. 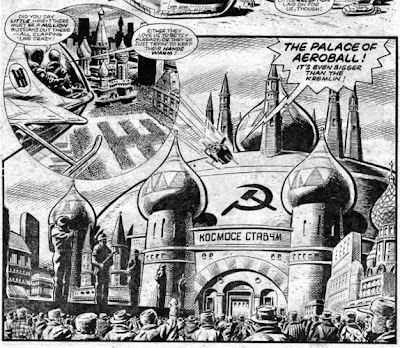 The Harlem Heroes have recruited some new trainees. Being hit by an aeroball travelling at 80mph is part of the training regimen. The Harlem Heroes new liner converts into a water-tight air-conditioned super-sub at the flick of a switch. Its tactics room has a tacto-mat three dimensional display and its medic-room has an autodoctor. They are the first foreign team to enter the Soviet Union. The Russian Aeroball fans form the Harlem Heroes symbol as a welcome gesture.

The London Synthesiser Orchestra (LSO) are also visiting Russia and the Bolshoi Ballet are heading in the opposite direction as the team head towards Moscow.

GIANT
He holds a tactics session in the liner's tactics room.

SLIM
He worries about Louis during the journey.

HAIRY
(Is he flying the satellite chopper?)

CONRAD KING
He supervises the training of the new recruits.

ZACK HARPER
He has a low-level support push tactic that Giant wants to alter by making Zack a decoy.

LOUIS MAYER
He is travelling in the liner's medic-room. Louis' nurse is along for the ride.

OTHER CHARACTERS
ARTIE NEILSON
One of at least three of the drivers of the Harlem Heroes' liner.

BORIS WOROSLOV
The Minister of Sport and Chief Director of Aeroball Activities.

BEST LINES
Unidentified Harlem Hero: "Either they love us to Betsy already, or they're just tryin' to keep their hands warm!"

WORST LINES
American Commentator: "Heck, the Russians all look the same to me, folks, so I'll have to go by numbers...I'll call them all Boris!"

Racism is still alive and well. 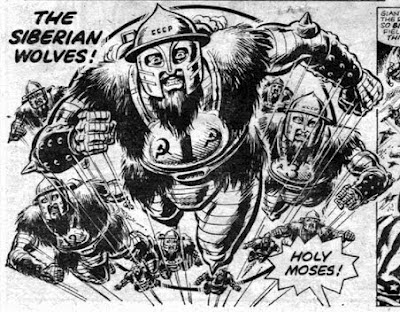 It means "For the Motherland"

CONTINUITY & CROSSOVERS
Judge Dredd's beat gets a mention with Mega-City One 3000 km written on a sign for trans-atlantic vehicles. Making this the first link between the two strips.

INFLUENCES
The Bolshoi Ballet was founded in 1776 and so would recently have celebrated its bicentennial as this strip was being drawn.

RETROSPECT
It may not be on the scale of the Trans-Atlantic Tunnel, the Channel Tunnel opened in 1994 connecting the UK and France. Also, the Soviet Union broke up in 1991, so presumably it reforms at some point by 2050.

NOTES
On the first page, there is a vehicle labelled Mills Moving, clearly in honout of Pat Mills, and another entering the panel on the top right hand side with what looks like part of the 2000 A.D. logo on it.

REVIEW
There are some great visuals in this strip, but it's more travelogue than sports action. The Siberian Wolves are suitably formidable and I love that the Harlem Heroes even stand in their trademark 'H' formation. Louis reasserts his certainty that the crash was no accident, although it's a shame that he doesn't remember anything new.