NAME
Harlem Heroes, Part 5 (according to Wikipedia, this is the fourth and final part of a strip also known as The Baltimore Bulls)

SYNOPSIS
The revelation that someone tried to kill the Harlem Heroes invigorates the team in the second half of their game with the Baltimore Bulls.

FIRSTS & LASTS
First strip to open with a double page spread, first four page strip and the first victory for the new team.

INFORMATION
The ball can bounce off the rebound pads and remain in play, there is one on the starboard side (and presumably one on the port side as well, why they are using naval terms is unclear). An air-switch is a sneak pass. 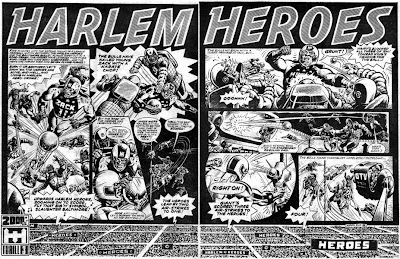 The Harlem Heroes play their home games at the Harlem Aero-drome. They win the game with six air-strikes, to the Baltimore Bulls one. The team are due to play the Siberian Wolves in Moscow in the next/first round of the world championships. Ulyssess Cord gives the Harlem Heroes' new superliner has a swim pool, gymnasium, canteen, sauna, tactics, first aid, dormitory, hangar, reactor room and a helicopter. 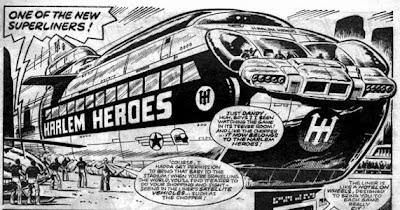 GIANT
He scores at least one air-strike, with King's assistance. Giant is suspicious of Ulysses Cord's generosity.

SLIM
He scores at least one air-strike, with Zack's assistance.

HAIRY
He blocks three Baltimore Bulls at once.

CONRAD KING
He presumes his life is threatened as much as those in the crash (he's right, but there hasn't been an attempt on his life).

ZACK HARPER
He gets karate chopped to the back of the neck by a Baltimore Bull.

OTHER CHARACTERS
LOUIS MAYER
He is well enough to go on tour with Harlem Heroes.

CHICO
He scores at least one air-strike.

ULYSSES CORD
He is the head of Trans-World Networks. He buys the Harlem Heroes a new superliner on the proviso that they win the world championships for America. 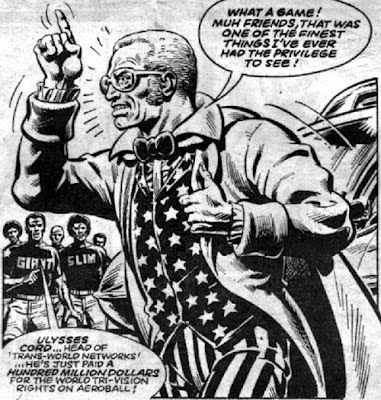 BEST LINES
King: "What kind of heel would want to rub out us Heroes? And why?"
Giant: "We'll know more when we talk to Louis. He's well enough to come on tour with us!"

Is he going to be the ball?

WORST LINES
Unidentified Harlem Hero: "...And lookit this chopper! It's got our emblem on it! Nifty!"

Giant, Slim and Zack's collective "?" is very odd as well.

Another rhyme, presumably sung to the tune of 'Onward Christian Soldiers'

CONTINUITY & CROSSOVERS
One of the Harlem Heroes talks about the Trans-Atlantic Tunnel also mentioned in Judge Dredd's 'Robots' and implied in 'Dream Palace'.

MISTAKES
Maybe I missed something but I thought the Baltimore Bulls was the first round of the world championships, but Ulysses says the Siberian Wolves would be.

It seems odd that you can't kick your opponent's neck, but you can karate chop it.

REVIEW
What a fool I was. I completely misunderstood Louis' thinking. Breaking bad news midway through a game seemed like madness, but look at the results. It's inspired them to beat the Baltimore Bulls. Not just beat them, but batter them as well. The opening two page spread is great with the action unfolding and the crowd's reactions underneath. The scenes after the game show Giant's unease very nicely.