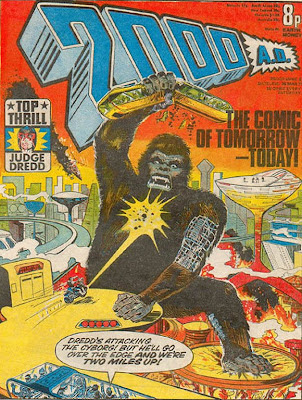 NAME
Judge Dredd: 'Krong'
(according to The Dredd Files in Megazine 214, this strip is also known as 'Robot Ape')

SYNOPSIS
Dredd investigates a series of grisly murders and discovers that movie monsters are to blame.

FIRSTS & LASTS
This Prog is the first time that Dredd featured on the cover and the first published strip drawn by Carlos Ezquerra. The first appearances of Dredd's cleaning lady Maria, Dredd's apartment, Krong and robots.

Sensor-Round are a company based in Mega-City One who sell apparatus to project 'dream worlds' into a location. One of the projections is a Sound Sea Islands locale complete with palm trees and scantily-clad woman. The rise of Sensor-Round's technology has led to a wane in the popularity of monster movies. The company lost three members of it senior board in as many days. The President of Sensor-Round was killed "by some kinda monster" in his 200th floor apartment (of the building Judge Dredd also lives in). The next day, the Managing Director was killed by a plant monster hiding in his begonias. The day after that their accountant was killed in his private swimming pool by a tentacled creature. Their office building is surrounded by a spiral road to the top.

Mega-City One also boasts a Movie Special Effects Museum which houses the robot monsters used in the movies of yesteryear. Kevin O'Neill is the museum's curator. Among the museum's exhibits are a plant with teeth, a squid creature with tentacles, a shark, a pterodactyl and Krong, a huge robot gorilla. O'Neill programs Krong to smash the Sensor-Round building. He rips up roadways to get to his target, before climbing the building. Krong is bullet-proof and the cannon mounted on a Judge's Lawmaster bike hardly marks it. Dredd's crashing bike explodes in his mouth destroying Krong's head and its body falls back to Earth landing squarely on O'Neill.

The city probably has a space shuttle station.

'Kwikka-Grow' Juice is a planet fertiliser which seems to work wonders on Begonias.

JUDGE DREDD
Lives in a building with at least 200 floors and has a cleaning lady called Maria. The president of Sensor-Round lived (and was killed) in the same building. He doesn't get much time to relax and when he does he chooses to read law books. He has seen murder victims before.

OTHER CHARACTERS
MARIA
Dredd's Italian cleaning lady. She costs him twice as much as a robot cleaner would. She thinks he works too hard. Possibly makes minestrone.

KEVIN O'NEILL
Curator of the Movie Special Effects Museum who poses as a Sensor-round salesman to kill its management team and as an excuse for carrying around the heavy equipment involved in the murders. O'Neill considers Krong to be "the greatest film monster ever made". He programs Krong to smash the Sensor-Round building. He is killed by a falling Krong.

DEATHS
Four. The President, Managing Director and accountant of Sensor-Round were killed in his private swimming pool by a tentacled creature. Kevin O'Neill is crusghed to death when Krong falls on him. Dredd also finds monster on two more monsters, assuming one was used to kill the Sensor-Round president, that still leaves another bloodied monster and presumably at least one more murder.

BEST LINES
Dredd: "Maria - throw this ferretfaced parasite out before I drown you in your minestrone!"

WORST LINES
Kevin O'Neill: "My beautiful Krong - His head's gone and he's falling - on me... At least (choke) we'll die, together!"

CATCHPHRASES
None, but Maria's accent is made obvious twice in her dialogue.

INFLUENCES & REFERENCES
King Kong (1933) obviously, although it's worth pointing out that the 1976 remake was probably still in UK cinemas when this was published. Dredd's method of dispatching Krong is very reminiscent of Jaws (1975). The plant monster is very Little Shop Of Horrors (1960). 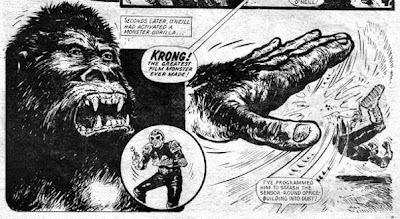 MISTAKES
Dredd is told that the criminal's voice print matches the curator of the Movie Special Effects Museum, but he isn't given a name. It seems unlikely that Justice H.Q. would know that the voice print was the curator, but not know the name. Presumably Kevin O'Neill is an alias.

RETROSPECT
It's interesting that a week after we saw a giant praying mantis we have not a giant ape, but a giant robot ape.

NOTES
The character of Kevin O'Neill is named after the then Assistant Art Editorial Droid of 2000AD and future Judge Dredd artist.

REVIEW
'Krong' has a nice set up and I like the petty motivation for the murders. The artwork is fine, apart from the Kevin O'Neill close-up. Everything is at relatively close quarters and it's odd that we never get to see Krong running amok in a wider view of a Mega-Cityscape, as hinted at by the cover (above). Also it's obvious that the attempt to domesticate Dredd obviously begins here and Maria is an odd place to start. The repeated use of the word dream doesn't quite justify the resonance that Dredd's final line is presumably supposed to have.
Posted by Dave at 10:00